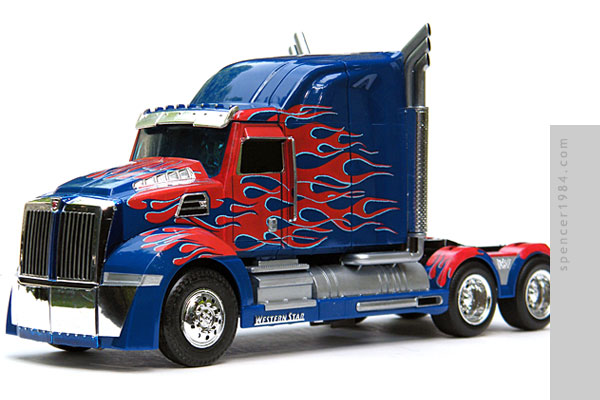 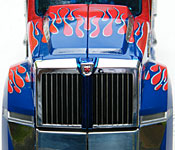 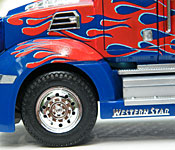 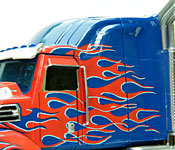 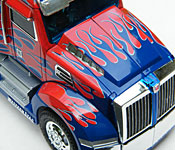 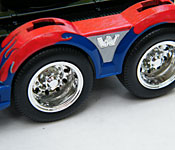 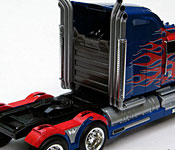 With the demise of the Human Alliance series, options for ~1/24 Transformers was rather limited. So I was cautiously excited when the initial images of Transformers 4: Age of Extinction's First Edition Optimus Prime looked like it might be close. True, he had gotten some pretty scathing reviews, but none of them seemed to ba aimed at his truck (and one or two even complained that he was too big). So I decided to give it a shot, and am glad that I did: he's as simple as photos suggest, and is a hair small for 1/24, but definitely had potential.

My first step was to get him into truck mode, which as mentioned elsewhere is more difficult than you'd expect. The spur on his left elbow joint seemed to cause the most problem: it hit the legs/chassis, preventing that arm from folding in all the way and pushing the left side of the sleeper out. Since I had no intention of transforming him again, my side cutteres solved the problem quite handily.

That problem solved, I moved on to upgrading his truck mode. The wheels were easy to pop off, and were replaced with a set from an old AMT truck kit. The front tires were from the same vintage AMT kit, but the back tires had to be a little smaller diameter to fit in the full fenders. I still had the tires from the 1/18 General Lee that was used to make G1 Prime's wheels, and with just a little trimming to clear the wheel mounts they were nearly perfect representations of Highway Super Singles.

Next came the paint & trim: Everything recieved a layer of gloss clear lacquer, which reduced the "toy" look immediately. The bumper wings, hood vents, window frames, visor, grab rails, and mufflers were all done with BMF, and the pipes, tanks, battery boxes, and side trim was all done with silver paint. The side windows, rear deck, and other details were painted black. The grille and bottom of the bumper were touched up with blue, and the flame deco and rear fenders were done with red. Finally, the flame deco was detailed with a light blue gel pen to add some extra depth and make it look more like the movie truck.