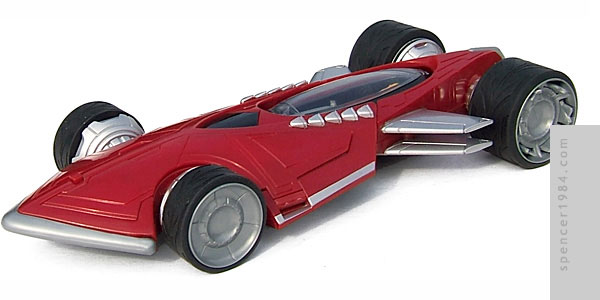 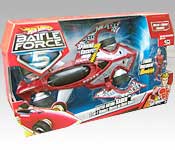 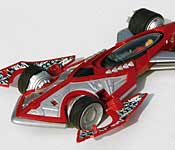 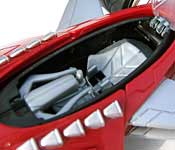 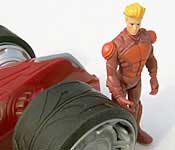 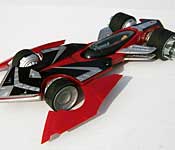 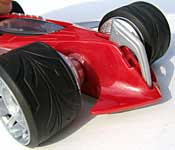 The Battle Force 5 deluxe vehicles are packaged in a window box that approximates the shape of the blister cards and is 8" (20.5cm) high, just over 14" (35.5cm) wide, and 4" (10cm) thick. The front panel features the Hot Wheels logo/BF5 logo in the top left corner, vehicle and character art and callouts across the bottom, and notes about the cartoon, included poster and coupon, and URL in the top right corner. "Spinning Cockpit" and "Figure Included" are printed on small pieces of cardboard glued to the window and pointing at their respective selling points, and a hole near the former callout lets you spin the cockpit in the package. "Battle Force 5" is written across the top of the box in a slightly lighter red than the box itself. The legal information is across the bottom of the box and on one of the end panels. The back of the box repeats the HW & BF5 logos, age restriction, and URL, plus it has images of the show's characters, a close-up of the driver for this particular car (Vert Wheeler) and notes about the driver and the car. Below the images are callouts of "two vehicles in one!" and "drives on both sides!" next to photos of Saber on both sides in "closed" mode and one view in "battle" mode. Across the bottom of the panel are co-sells for Vert Wheeler/Saber, Sherman Cortez/Buster Tank, Zoom Takazumi/Chopper, Stanford Isaac Rhodes IV/Reverb, and Kalus/Fangore. Saber is snapped into a pair of plastic trays glued to the back wall of the box with a plastic band near each axle holding the car to the tray and a rubber band around each forward wing holing it open. The boomerang missile is rubber banded to the larger tray under the front of the car. Vert is held in a second, smaller tray on a cardboard shelf along the right edge of the box. Packed between the rear of the tray and the rear of the box are a poster showing the BF5 team, a coupon for $3 off a BF5 racing set, and a nearly useless set of instructions (more on this under "Features/Accessories").

Looking at Saber in the package, the first impression is that someone at Mattel royally goofed when it came to scaling: Saber uses the same sized box as Buster, and fills most of it despite being shown in the cartoon as about the same size as Reverb. Consider it a tribute to engineering and marketing, though, because once it's out and folded into "street mode" Saber looks perfect next to the others. In this mode, Saber is roughly wedge-shaped, with a wide, flat prow tapering to a point at the rear. The forward section is covered with panel lines, some of which are functional as part of the toy's action feature. There is a small button about 1" (2.5cm) back from the point of the nose that triggers the release of the front bumper as a boomerang. The cockpit is located just in front of the rear axle, with a series of five vents on each side of the canopy and a black shield-shaped panel directly in front of the canopy. Two horizontal wings stick out of the side of the body in front of each rear tire, and the very rear of the car sports a vertical bar and contoured splitter. Each wheel is mounted on a roughly dome-shaped mechanism divided into six sections. Flip the car over, and the front of the car is much flatter, with a series of triangular panels painted silver against a black background. A long red triangle appears in front of the cockpit, and the area behind the cockpit is now flat with a rear wing just behind the rear tires. This is very much the "secondary" side, as several screw heads are now visible and the tire treads are now facing the wrong way. The main body is cast in metallic red plastic, with silver paint used for the wheel mounts, vents, wings, stripes, hood panels (in battle mode), and panel detailing (on the underside). Black paint is used for the shield, and most of the underside. Stickers are used to detail the insides of the wings, and while they don't look bad, they don't really seem to fit with the rest of Saber's design. The cockpit is cast in black plastic with a clear colorless canopy. Silver-gray plastic is used for the front bumper, controls, rear bar, and wheels. The tires are soft vinyl.

As team leader, Saber gets the most gadgets. The front bumper has an asymmetrical series of tabs that lock into the front of the car, so that when it is triggered it spins like a boomerang. Next, a pair of large wings can be deployed by extending the body (this is done by simply grasping the front and rear wheels and pulling them away from each other). The cockpit is on a central pivot and is weighted at the bottom to maintain the correct "canopy up" orientation when Saber is flipped over. A little fine adjusting may be necessary to get the cockpit perfectly level, but it comes pretty close on its own. The cockpit can also be pushed forward slightly to deploy the rear tire slashers. Finally, a blade/bar/loop can be hinged part way out of the back...I'm not sure what exactly it's supposed to do. The instructions are no help on any of these features, as they simply show a couple of photos of the vehicle being held by phantom hands. To make them universal, there is no text to explain what's going on. The box art is just as helpful, and at least the box art is in color so it's nicer to look at. There is also a 1/24 scale figure of Vert Wheeler that can be placed in the cockpit. Vert moves at the neck, shoulders, and hips, and features a nice amount of detail work including lots of seams to make the suit look like body armor and a tiny BF5 logo on his chest. The joints are nice and stiff and the paint applications are good. Vert apparently went through fewer changes between prototype and product than some of the other figures in this series, as he matches the art pretty well.

In street mode, the only thing Saber is missing are a few paint applications: the animation model includes black wheel hubs, gold detailing around the wings and wheel mounts, and a lot more paint along the sides. The sculpt work is all there, just not the paint. In battle mode, however, it only vaguely resembles the animation model (and that's only if you squint and look kind of obliquely at it). Putting it chassis-up helps somewhat, but it's still not quite right. The animation model seems to defy the laws of physics, however, so some concessions should be allowed. I plan on keeping it in street mode, so I don't mind the halfhearted battle mode, but your mileage may vary. At 10.5" (26.5cm) long, Saber needs a big parking spot, but scaling is very good despite my original concerns.

If not for the weak battle mode, this would easily be the best of the series. Even with that shortcoming, it's a very cool design that has been well rendered and has quite a bit of play value. Although it is about the same size as the "Standard" 1/24 BF5 cars, the $4 price difference between is justified thanks to more action features and higher quality parts like the rubber tires. Recommended.