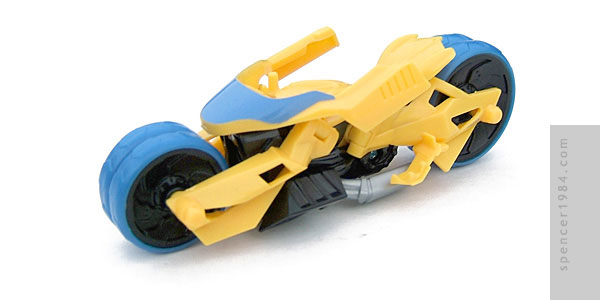 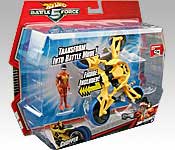 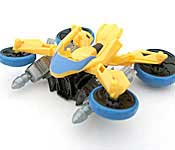 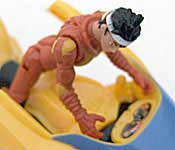 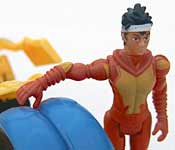 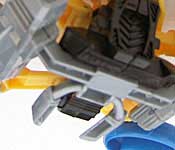 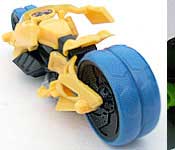 The Battle Force 5 standard vehicles are packaged in a roughly octagonal blister card 11" (28cm) wide and just over 8.25" (21cm) high. The clear blister takes up nearly the full front of the card, with only a 1" (3cm) strip across the top for the Hot Wheels logo/BF5 logo to the left of the hanger and "trading card included" text to the right. The official site URL is written along the bottom right edge. The rest of the front of the card is covered with a blue swirling electricity design framed with red mechanical elements. The vehicle and driver names and images are on a separate insert card, as is the legal information (the latter being folded to appear across the bottom of the packaging). The back of the card repeats the HW & BF5 logos, age restriction, and URL, plus it has images of the show's characters, a close-up of the driver for this particular car (Zoom Takazumi) and notes about the driver and the car. Below the images are callouts to "transform vehicle to battle!" and "press for weapons!" next to photos of Chopper in street and battle modes. Across the bottom of the cardback are co-sells for Zoom Takazumi/Chopper, Stanford Isaac Rhodes IV/Reverb, Agura Ibaden/Tangler ATV, Captain Kalus/Fangore, and Zemerik/Zelix. Chopper is snapped into a plastic tray with a plastic band around three of the four cycle arms. Zoom is held in a second pocket of the main tray, to the left of Chopper.

Being a sci-fi motorcycle, there's really not much here. But the designers made the most of it, with well-done details like the radiator face and the transmission housing. Fairings and winglets are used to create a nice sense of speed.The main body is cast in a deep yellow, with black paint for the seat and blue paint for the windshield. Black plastic is used for the engine and wheels, blue plastic is used for the tires/hoverfans, and silver-gray for the exhaust pipes and missile launchers.

Chopper transforms into a hover bike, with each arm pivoting to create a hoverfan out of a wheel. The frame extends in the middle, offering more room to arrange the rear wheels/fans properly while still looking good in bike mode. A pair of missile launchers mounted on a cross brace snaps tightly onto Chopper's underside and can be used in both street and battle modes. Each missile is fired by pressing back on the launcher's upper control surface. There is also a 1/24 scale figure of Zoom Takazumi that can sort of be placed on Chopper's seat. Zoom is made slightly differently than other BF5 figures, with double-hinged shoulders to better allow him to grasp the handlebars. Even so, his fit on Chopper is laughable at best.

Chopper misses the mark in quite a few places, but the misses all seem to be a result of turning the animation model into a working toy. The biggest change is on the upper fairing, where the hand guards have had their bottom contours removed to make room for the front suspension arms. Also, the hinges where the suspension arms meet the frame and the axle joints are all much heavier than they are on the animation model. Battle mode is similarly hampered by reality, as the hover fans are not nearly as intricate and the middle of the craft is filled in by the missile launchers. Although these are inaccurate as well, they fit the overall aesthetic nicely and so deserve some credit there. Scaling is...interesting. Compared to its Battle Force 5 teammates, Chopper doesn't look too far off. Compared to its rider, though, Chopper is huge. Whether or not this bothers you depends on how literally you consider it a "motorcycle." Also, like all BF5 vehicles, more paint applications would have been great.

Small-scale motorcycles are difficult to replicate accurately, and adding play features to them makes the task nearly impossible. That being said, Mattel did a pretty good job fitting all of Chopper's features into this little vehicle. The only real drawback is the size of the bike compared to the size of the figure, but the sci-fi design does help mask this. The blue and yellow are not nearly as bad as I expected them to be seeing promotional art, and actually manage to work well on the finished piece. The $13 price tag may seem a bit steep (considering that Buster is only $4 more), but you get a lot of play value packed into a neat looking replica of the team's only two-wheeled member. Recommended.