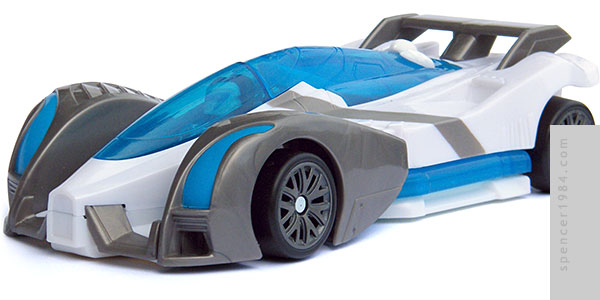 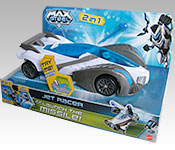 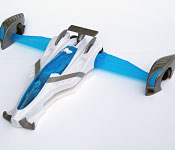 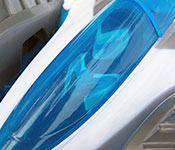 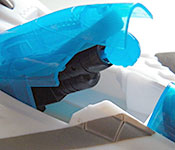 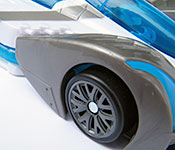 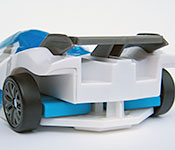 After moving with his mother to the small city of Copper Canyon, 16-year-old Maxwell "Max" McGrath discovers that he is actually a human/alien hybrid with the ability to generate large amounts of Tachyon Unlimited Radiant Bio-Optimized (TURBO) Energy. After being taken to N-Tek, a secret organization whose mission is to protect Earth, he meets N'Baro Atksteel X377, aka "Steel." The two team to form "Max Steel," a super-powered hero with the ability to generate myriad armors and weapons to use in the fight against evil. Should a little extra speed or power be needed, the crew at N-Tek has also provided vehicles capable of their own transformations.

The Jet Racer is in a an open package, combining a thick tray with a vertical cardback. The tray measures 10" (25.5cm) x 5" (12.5cm), tapering from 1½" (4cm) at the front to 2½" (6.5cm) by the cardback to place the car at an angle while it's on the shelf. The cardback is 6" (15.5cm) tall. The left side of the front edge of the tray has stylized photos of the toy in car and jet modes, with a "2 in 1" callout above them. The right side has a drawing of the Jet Racer next to the Mattel logo and age restriction. This drawing and the "2 in 1" and "Jet Mode" callouts are die cut so that when the shelf of the tray was folded over these remained upright. It adds a little extra interest to the package, and is nicely done. Centered on the front panel is "Jet Racer" and a call to "Launch the Missile!" with arrows pointing at the stylized photos. The side panels repeat everything from the front panel, simply rearranging the elements to fit the different size and shape. They also add in the Max Steel logo. The top of the tray is a blue field with electric effects and a set of tire tracks leading off the edge of the package (which have neither the the track nor tread pattern to match the vehicle, but still a fun touch). A separate pop-up is inserted between the vehicle and the front of the package, shaped like an arrow with a large "Try Me!/Press Steel!" on a yellow field above a basic drawing of the action feature. The cardback has a large Max Steel logo in the top left corner, and the titular characters on the right along with another shaped edge. Between the two is another "2 in 1" callout, and the clear blue plastic missile captured in a plastic blister. The back of the package has large versions of the stylized photos we saw elsewhere, along with some basic instructions, all of the co-sells, a call to visit their web site, and some of the legal info. The rest of the legal info is on the bottom of the package. The Jet Racer is held in place with a two of Mattel's usual plastic twist fasteners and a rattan string. Nothing covers the vehicle, leaving it vulnerable to damage and shelf wear. A single-page instruction sheet is held inside the tray. The colors and overall style of the package are very appealing, mixing blue, white, and green to give it the appropriate high tech look. There's also no secrets, with the car and its accessory right out in the open. But having it out in the open is asking to get it dirty or damaged, and there's no way to remove it without destroying the package.

The Jet Racer is primarily cast in a milky white plastic with silvery gray plastic used for the front fenders and spoilers; transparent blue plastic used for the canopy, missile, and side inserts; and black plastic used for the wheels, cockpit, and missile launcher. The casting is adequate, with generally good alignment but wide tolerances. The soft plastic makes hard edges impossible, but the designers generally did a good job working within the limitations of the material. Paint is limited to blue (headlights and driver details), silvery gray (stripes and wheels), and white (driver details). The blue is pretty sharp, and only has a few minor nicks around the edges. The silvery gray and white, though, are a bit of a mess. The stripes have severe flaking along the edges, suggesting the masks were improperly applied. The wheels are much sharper, but the left rear had a plastic strand caught in it that left scarring across most of the face. The driver looks like no pains were taken to properly align or mask the paint, but being permanently stuck under the canopy helps hide some of the problems. His casting is pretty decent, though. The chassis, unfortunately, is back to "disaster" territory. A plain flat panel would be preferable, since at least then you could claim it was aerodynamic. This looks like a cheap ice cube tray. It's fine when the car is on the ground and you can't see it, but don't go swooshing too high in jet mode.

The Jet Racer is designed with a transformation very reminiscent of the classic M.A.S.K. vehicle Firefly. By pulling the rear spoiler back, a set of wings hinge out from the sides of the vehicle. The rear wheels end up at the back of the car like thrusters and the front wheels end up on the wing tips as weapon pods. These are all sprung and geared together, so no extra work is needed to convert from one mode to the other. The dorsally-mounted missile launcher can be used in either mode by pressing down on Steel, then pushing back on him to fire the missile. The missile fires about 4' (120cm), and is soft and light enough to not do any damage.

The Jet Racer has never appeared in the series, and so has no prototype to compare. It's roughly shaped like a Le Mans Prototype racer, with the dramatic fenders and central cockpit typically seen on these cars. The size of the driver puts this right around 1/24.

It's a fun enough toy and captures he general aesthetic of Max Steel, and the M.A.S.K. throwback is a nice touch, but without having the strong tie to the series like the Turbo Racer this is by no means a must-have. Wait for a clearance sale before getting this one.