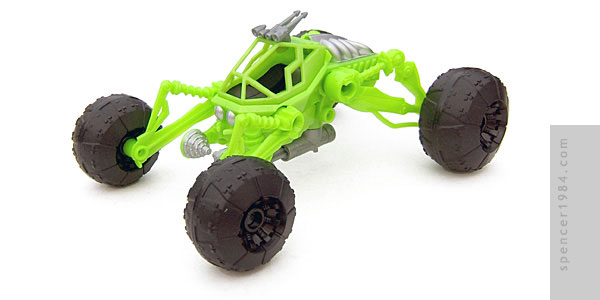 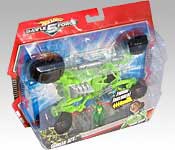 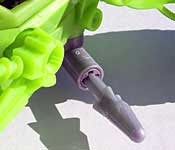 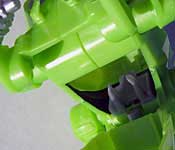 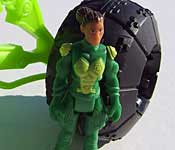 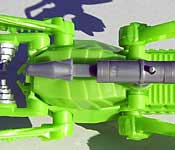 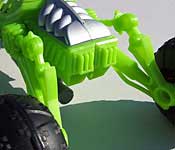 The Battle Force 5 standard vehicles are packaged in a roughly octagonal blister card 11" (28cm) wide and just over 8.25" (21cm) high. The clear blister takes up nearly the full front of the card, with only a 1" (3cm) strip across the top for the Hot Wheels logo/BF5 logo to the left of the hanger and "trading card included" text to the right. The official site URL is written along the bottom right edge. The rest of the front of the card is covered with a blue swirling electricity design framed with red mechanical elements. The vehicle and driver names and images are on a separate insert card, as is the legal information (the latter being folded to appear across the bottom of the packaging). The back of the card repeats the HW & BF5 logos, age restriction, and URL, plus it has images of the show's characters, a close-up of the driver for this particular car (Agura Ibaden) and notes about the driver and the car. Below the images are callouts to "transform vehicle to battle!" and "press for weapons!" next to photos of Tangler in two stances: standing and sprawled. Across the bottom of the cardback are co-sells for Zoom Takazumi/Chopper, Stanford Isaac Rhodes IV/Reverb, Agura Ibaden/Tangler ATV, Captain Kalus/Fangore, and Zemerik/Zelix. Tangler is snapped into a plastic tray with a plastic band fed through the roll cage and under the tray. The missile launcher is snapped into a pocket under the ATV. Agura is held in a second, smaller tray near the bottom center of the larger tray.

Tangler suffers two major drawbacks. First, it is attempting to make a toy out of a relatively spindly design. That means that many of the delicate suspension components like the coil springs have been simplified to the point of being nearly unrecognizable. It also means that Mattel used a softer plastic here than what was used for some of the other BF5 cars (likely as a safety measure to prevent the legs from snapping off and turning into sharps), so the details are not as crisp as they could be. The other major drawback here is the color: Zelix was able to get away with the softer plastic in part because of the more solid sculpt, but mostly because the dark gray worked with the sculpt instead of against it. Tangler's bright green, on the other hand, tends to exaggerate every rounded edge and soft panel line. This green plastic is used for everything except for the wheels, cockpit, upper lights, and missile launcher. The first two are cast in a hard black plastic, while the lights and weapon are cast in a silver-gray plastic. Silver paint is used for the cones, lower headlights, and top of the engine.

Tangler has a working suspension, with each axle independently sprung (so you can raise both rear wheels together, but not independently). There is enough play in the "shoulder" joints to allow all four wheels to touch the ground when one wheel is on a raised surface of up to .75" (2cm). The front axle has about 1" (2.5cm) of travel, the rear axle a little more. Although the arms can be repositioned to match the "standing" pose shown on the back of the card, it feels like doing so damages the internal suspension components (I tried it with one front wheel, which now feels much looser than the other three wheels). A missile launcher gets mounted on the underside of Tangler, and has a trigger on the bottom so that it fires when you depress the suspension. It's a neat idea, but is easy to accidentally trigger if you set it down too hard, pick it up wrong, or catch it while "off-roading." There is also a 1/24 scale figure of Agura Ibaden that can be placed in the cockpit. Agura moves at the neck, shoulders, and hips, and features the same nice detailing work and good joints as the other BF5 characters. It looks like the roll cage should lift out of the way to seat a figure in the cockpit, but the opening is actually a hinged panel under the the vehicle. If the missile launcher is plugged into its socket, it will need to be turned sideways to allow the panel to open wide enough to get a figure inside.

Tangler has the same good sculpting work as the other BF5 vehicles, but thanks to a softer casting and screamin' green color, it looks much worse than the others. What should be a rugged fuselage mounted on fully articulated spider legs looks like a crude knockoff. Although there isn't much that could be done about the sculpt without raising the price substantially, a slightly darker green would've been more show-accurate and would've helped the overall look as well. Scaling looks pretty good in relation to the other BF5 cars.

Tangler is definitely the weakest of the Battle Force 5 series. A better color certainly would've helped, as would more paint applications. They also could've lost the working suspension and went with a set of action figure-style ball & socket joints to allow Tangler to move like it does on the show. As it is, Agura is the strongest part of the whole package, but $13 is a bit steep for a 1/24 action figure. As it is, this is probably the one to pass on unless you are getting all of the other vehicles or really like Agura.