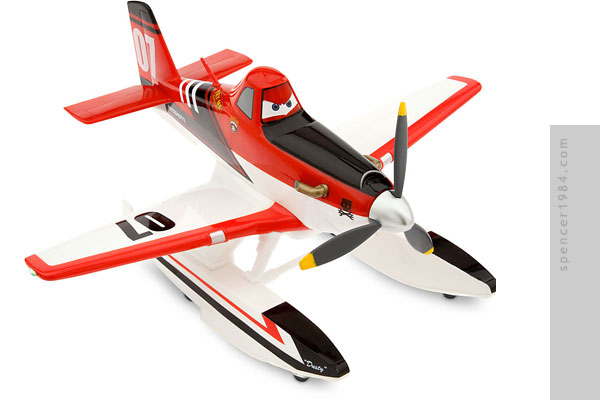 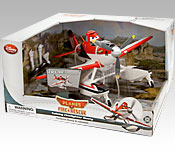 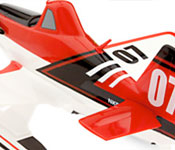 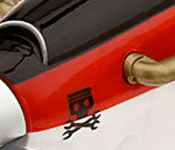 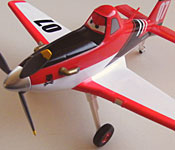 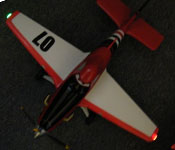 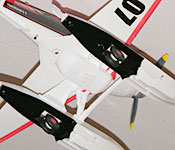 After winning the Wings Around the Globe race in Planes, Dusty Crophopper becomes a successful racer despite having to regularly stress himself beyond his physical limits. One of these incidents causes a fire at the Propwash Junction airport, and although the fire is contained the airport is closed until a designated fire squad can be assigned to protect it. Accepting his responsibility for the situation, Dusty travels to Piston Peak National Park to become a certified firefighter. As part of his new role, Dusty is outfitted with a pair of pontoons and a new paint scheme.

The Fire & Rescue series is similar to the original Planes packaging insofar as being a large gray open-topped box, but it is now smaller and lacks the "airplane hanger" look. It is 13½" (34cm) x 12¾" (32cm) x 7" (18cm) with full walls on the back and one side, and partial walls on the other two. The front of the package has the Disney Store logo, Planes: Fire & Rescue logo, "Talking Firefighter Dusty," the age restrictions, and a small image of Dusty in flight. The one full end panel has a large portrait of Dusty flying through a mountain range and the movie's title logo. The partial end panel has a smaller version of this portrait at a different angle and the title logo. The back panel has a large photo of the toy surrounded by callouts to Dusty's features in multiple languages: "16 Phrases!" "Removable Pontoons!" and "Motion Activated Engine Revving Sounds!" Two smaller photos demonstrate his spinning propellor and removable pontoon assembly. While still not objectively great, these are much more helpful than the total lack of information on the previous figure. The bulk of the legal information is printed near the bottom of this panel, and another title logo is near the top left corner. The bottom of the box has only the battery exchange info and a Disney Store sticker. The two full walls form a partial top panel, which has only the title logo and "Talking Firefighter Dusty" text. This top panel makes it so that these boxes can be stacked, but the reduced size coupled with the way Dusty is packed means that his propeller sticks up above the box top and is at risk for getting damaged. The prop is hefty enough to shrug off minor bumping, but this is just poor planning. The inside tray has a beautiful mural of Piston Peak National Park, printed as if Dusty were flying high above the trees. Dusty is held onto a clear plastic tray with two large plastic bands. clear plastic is wrapped around the prop tips, cowl, and rear fuselage. A clear rubber band holds his lower rudder in place, and his alternate parts are captured in a clear plastic tray on one wall of the box. "Try Me" it printed on both a cardboard standee inside the box and on a sticker placed near Dusty's antenna.

Despite sharing the same overall look as the previous Dusty, this one is an all-new and much improved casting. The biggest upgrade is the better plastic: even when held up to a light, the white areas appear solid. The only place that is somewhat translucent is the rudder, but even that isn't too bad thanks to the deep red plastic. This version of Dusty is also built much sturdier, with thicker wings (possibly required thanks to the working nav lights) and some clever part reinforcements (such as the struts under the elevators). This has come at the expense of details like the ailerons and flaps, though the rudder and elevators are still outlined nicely. Finally, the designers were smarter this time around as far as working with the materials instead of against them. One of my complaints about the earlier Dusty was the poor color matching between the (cast) lower fuselage and (painted) upper fuselage. This time, the material breaks are also color breaks—addressing both the need for exact color matching and sharp-edged paint lines at the same time.

That last point is especially important considering that the paint apps haven't really improved a whole lot. The cowl panel, side windows, and printed areas like the numbers, eyes, and Jolly Wrenches insignias are outstanding. The pontoon and fuselage stripes, on the other hand, have substantial ghosting and blurred edges. There is also some silver paint used for the prop cone, landing lights, and air scoop trim, yellow paint for the propeller blade tips, and gold for the exhaust tips. These paint apps fall somewhere between the two extremes.

The smaller landing gear wheels are cast in black plastic, while the larger tires are cast in a softer rubber mounted on red-painted black plastic wheels. As with the previous Dusty, the antenna trigger's Dusty's voice and the remaining electronics are arranged on his ventral surface: speaker, prop trigger, battery box, and on/off/try me switch (as they appear fore to aft).

Despite claims of Dusty speaking 16 phrases from the movie, I can only get him to say 6: "Copy that," "Flying low, no problem," "Hey guys, what's up? I'm Dusty Crophopper," "Hey Propwash Tower, this is Crophopper 7 fight 02, ready for takeoff," "Yeah, I'm feeling it—I'm feeling good about my next race," and "Woah." These run in order, and start with the same phrase every time you turn him on. Moving him or pushing the button to spin his prop will also activate his engine sounds. Continuous movement will repeat the engine revving sound, while leaving him alone will have the noise switch to an idling engine before turning off completely. His landing gear can also be switched between traditional taildragger and amphibious floatplane. The parts swap out easily and hold in place nicely, though you'll need to be sure to seat the tail piece all the way, otherwise it may fall out. The pontoons have retractable landing gear.

Dusty matches his Fire & Rescue appearance very nicely, from the new undercarriage to his more determined expression. A few concessions had to be made thanks to the realties of creating a toy: the gear doesn't stow quite like it does in the animation model, and the prop trigger and speaker interrupt what should be a cleaner design, but nothing fatal. He's a little smaller than the earlier Dusty, but is close enough to still be considered the same scale. Disney's designers still can't figure out how a propeller works, though, as Dusty's prop is still geared so that pushing the trigger spins it backwards.

Although the overall score is the same here as it was on the first Dusty Crophopper, the figure itself is actually much better (the score is brought back down by the packaging that is too small to properly protect the figure). It looks better, has better play features, is sturdier, and the float plane design is actually quite cool. The price is essentially the same as the previous one, but as long as you plan to take it out of the package you're getting a lot more for it. Recommended.