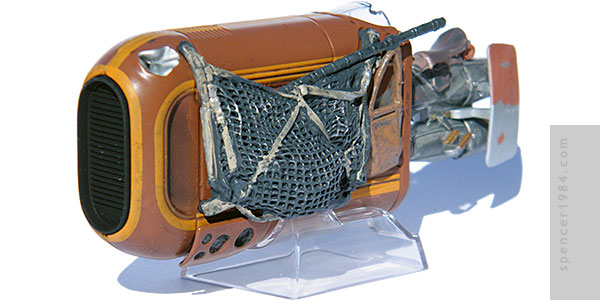 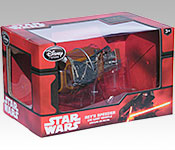 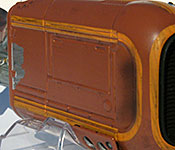 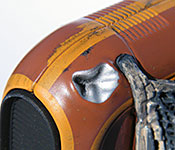 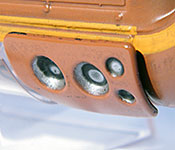 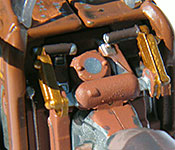 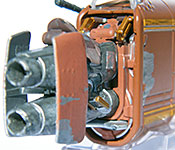 Set approximately 30 years after the events of Star Wars Episode VI: Return of the Jedi, The Force Awakens revisits many of the classic characters from the original trilogy such as Luke, Leia, Han, and Chewie. It will also be introducing several new characters, including Rey, a scavenger in a starship graveyard on the desert planet Jakku.

The packaging for this line is simple but beautifully executed. It measures 6½" (16.5cm) x 4¼"" (10.5cm) x 4" (10cm), with a rectangular window on the front and top panels. A few pieces of art overlap the window, breaking up the regular shape: a dramatic portrait of Kylo Ren in the bottom right corner of the front panel, the Disney Store logo near the top left corner of the front panel, and the Star Wars logo and a note about this vehicle being from The Force Awakens near the left and right rear corners of the top panel, respectively. The front panel also has the Star Wars logo, "Rey's Speeder/Die Cast Vehicle/Voiture en Metal," and the age restriction. One end flap has another window to see the end of the speeder, with the Disney Store logo above and the Star Wars logo below. The other end flap just has a large Star Wars logo centered on the panel. The back panel repeats the vehicle, gives a brief explanation of its role ("For quick transportation across the junk-strewn dunes of Jakku, Rey relies on her old salvaged speeder"), and has the legal information. All of this is printed in multiple languages, and like the window flap it has the Disney Store and Star Wars logos near the corners. The bottom has the rest of the legal info. Inside is a three-wall corrugated cardboard tray, on which is mounted a plastic tray that cups the bottom of the speeder and holds its display stand. The speeder is held in place with a single twist tie. The cardboard panels are weathered dark red with minimal dark gray panel lines (including a thin line framing both windows), and the text in all in white. It's really a perfect study in the "less is more" design philosophy: by limiting the palette but using sturdy materials and high print standards the overall package looks and feels very well thought out. It's also incredibly sturdy thanks to the internal cardboard, and the plastic tray is formed well enough to hold the speeder for display and casual movement without requiring the twist tie.

The first thing you notice about this is its weight. The whole nose of the craft is metal, so it weighs nearly ⅓ pound (143g). The main intake, repulsors, control vanes, and chassis are rigid plastic; the windscreen is transparent clear plastic; and the hand controls, foot pegs, and cargo net/equipment are soft vinyl. Detailing is generally very good, and while some things have been simplified there is nothing that really looks wrong. The soft vinyl pieces are especially good, with sharper detailing and straighter edges than what you'd normally expect from this material. The only detraction is the longitudinal seam: it doesn't look too bad on the cowling, but the dashboard and engines could have been done better.

The paint is competent, but not really outstanding. Overlapped paint masks are visible around the speeder's grille, and the worn paint looks more like the silver part of a two-tone paint job than stripped metal. The grille is the only non-weathered component, and is simple flat black.

The general shape is very good, and many of the details appear to be screen-accurate based on the limited views we have seen in the trailers. It does fall a little flat on paint, though, as there is a certain art to weathering that is difficult to capture with a mass-market item and even harder to capture in the sub-$10 price range. Still, an attempt was made, and none of it was done so heavily as to ruin the vehicle for anyone who may want to redo the paint themselves. No official stats have been provided yet, but judging by the distance from the saddle to the foot pegs and hand levers, this looks pretty close to 1/24 scale.

The most famous Star Wars vehicles are usually too large to see in 1/24, so it's nice to see more from the iconic franchise available in this scale (or a least very close to it). Though it may not be a museum-quality replica, it's a very fun little craft that comes at a great price. Recommended.