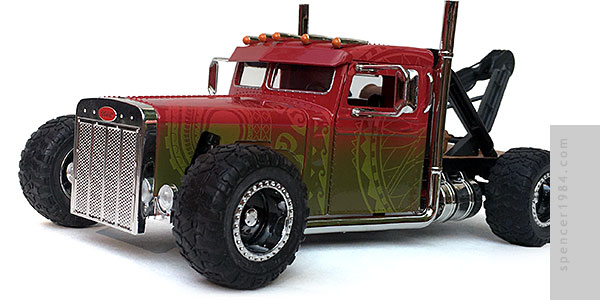 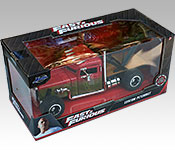 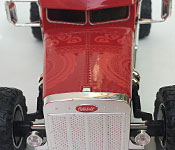 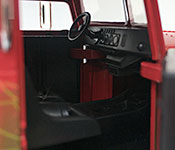 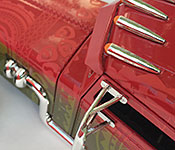 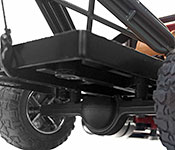 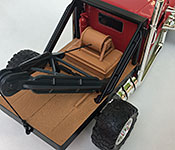 When reluctant allies Hobbs and Shaw need a place to lay low and get their MacGuffin repaired, they head to Hobbs' childhood home in Samoa. His brother Jonah is the genius of the group, but the entire Hobbs clan is well-versed in mechanical arts and they use a bevy of custom trucks in the final confrontation against a Black Hawk helicopter. The first of these, driven by Shaw and manned by Hobbs, is a twin turbo Peterbilt buggy.

Jada has updated their Fast & Furious packaging to the 2020-style box, with a smaller and fully framed window. The Jada logo has been moved to the new corner, while the Fast & Furious logo is now under the window next to Vin Diesel's mug. The "Metals" verbiage has been dropped entirely, replaced with a "Die Cast" bullet at the bottom right corner of the window. The rest of the packaging is basically the same as it has been, with the movie logos on the end flaps, co-sells on the back, and legal block on the bottom. The truck is held to the inner tray with two screws. Two plastic trays - one near the passengers' door and the other at the back of the truck - keep it from rattling around, while a plastic band holds the doors closed.

The hood, cab, roll bar, and rear deck are the usual diecast, with good clean work and sharp detailing on the rivet and hinge details. While it's not perfect - the cast-in door handles and valleys around the turbochargers look a little flat - it's generally excellent work for a mass market item. The woodgrain on the rear deck is surprisingly effective, to where I assumed it was plastic at first. Black plastic is used for the suspension components, all of which are separate from the chassis. The rear boom is dark gray plastic, attaching a black hook to brown drum via a single elastic cord. Chrome-plated plastic is used for the grille/headlights, turbos/exhaust pipes, mirrors, clearance lights, grab handles, and fuel tanks. Most of this is good or great: the grille is nicely textured and has clear lenses for the headlights, and the mirrors are finely cast. But the exhaust pipes are hollow on the sides near the cab, and the fuel tanks have big seams splitting them in half. The latter is particularly annoying, since orienting the split 90° would have had the seam completely hidden by the pipes and rear wheels.

Inside is the correct custom dashboard with cast-in gauge faces and controls, a separate steering wheel, bucket seats, and nicely textured door panels. What's not there? A shift lever. It doesn't seem to be an assembly error, since all the promotional photos don't show anything, but there's a big hole in the floor where it was clearly intended at some point in development. The chassis is a step up from Jada's usual pan, with frame rails, separate axles front and rear, and cast-in details for the engine, cab floor, and cab support. The wheels are black-painted chrome beadlocks with outstanding balloon buggy tires - these are what off-road tires should look like.

While there have been a couple of missteps with the casting the paint job more than makes up for it. The base red/green fade is as good as you'll see on any mass-market item, and the graphics are flawless. Registration is spot-on, the colors are blended well, and it all just comes together beautifully.

The doors open and close, and while there's no way a diecast like this could have working piano hinges I do give credit to Jada for getting the traditional hinges to stay as tight to the cab as possible to give it a correct look when open. The rear hook can be removed from the deck frame and hooked onto something, but the elastic cord isn't going to have enough strength to keep most other cars off the ground.

The front half is just about perfect. The turbo cutouts could be tighter and the front axle is a bit heavy, but these are just looking for things to complain about. The rear of the truck, unfortunately, is hit a bit harder by the reality of manufacturing and mass-market retail. The roll bar and boom lack the open framing seen in the movie, and the winch is mounted to what appears to be a steamer trunk. None of the supplemental rigging is here, and the elastic cord works great as a stand-in for steel cable but less so for chain. The net result is that the front half looks like a much more expensive diecast, while the rear half barely keeps up. Scaling is tricky to measure on a rig like this, but comparing the cab width to my Duel truck this appears to be right around 1/25.

Though it sounds like I'm giving this one a hard time, I actually really like it. Every release has a budget, and Jada smartly knew where to put their money to get the best looking truck they could. A fully detailed rear deck and boom would have been fantastic, but impossible for a diecast in this price range. The great casting and beautiful paint work on the cab sets this up to be an excellent custom piece, but it still looks great right out of the box.