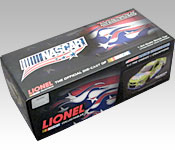 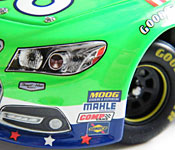 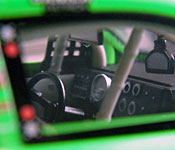 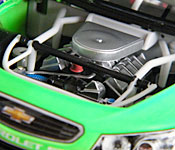 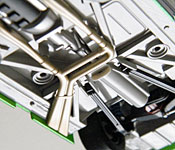 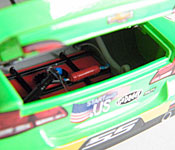 Danica Patrick had a new look on her Chevy SS when she hit Daytona International Speedway on July 6. As part of the NASCAR®: An American Salute program, Patrick ran a patriotic paint scheme that included stars on the side skirts and a "Start with .US™" in an American flag logo on the hood and deck lid. This industry-wide initiative supports military families at home and abroad and shows appreciation to our active troops.

Lionel became the official NASCAR diecast manufacturer in 2011, but maintained the shoebox-style packaging with a lift-off shell and a two part foam tray that has been the standard for several years. The box top art combines the American flag with a typical hot rod "flame" deco on a black background, with the NASCAR logo, "Proud to say 'thank you' and honor members of the military" text, Lionel branding, and "1:24-scale stock car/limited edition adult collectible" text. Both long sides repeat the flag & flame deco and Lionel branding. One long side repeats the "proud to say..." text, while the other one has a foil sticker indicating it as an official diecast and a larger 4-color sticker showing a photo of the included diecast. One end panel has the two-digit year the replica was issued (13), Action "A" logo and "Action Racing Collectibles/Still the choice of champions" text, barcode, and a silver sticker that includes the driver name, car number, sponsor, car type, edition size (600), and part number. The other end panel repeats the ARC text under another photo sticker. The bottom of the box has all of the legal information, Lionel Racing contact information, and instructions on how to safely remove the car. This has been added as the car is no longer simply sandwiched between the two foam trays: it is also held to the bottom tray with two screws. It doesn't seem to make the car any safer, and actually detracts a little bit because it means that there are now two holes in the car's chassis.

The packaging also includes a card, encouraging you to register the Diecast Identification Number at LionelRacing.com. I seldom bother with this option, but decided to give it a try. My first attempt was using the "Register" link at the top of the page, which actually just registers you at the Lionel Racing store. Instead, you need to hover over the "RCCA Resources" option in the main menu, then select "DIN Registration," which takes you to a page at RCCAMembers.com. You'll have to set up an account there, and then you can input the code from the back window of the car. Once registered, you can log in to the site any time and see that you do, in fact, have that car. It doesn't really offer anything special - no facts about the car or driver, no pictures, etc. The only information visible is the same as what you see on the end of the box and through the back window of the car. You can order an official certificate for $7 plus tax, but I really can't see why you'd want to.

The "ARC" cars are what used to be called "Preferred," meaning that they are the mid-level diecasts featuring working body panels (HOTO; "hood opens/trunk opens") and suspension, but lack the highly detailed engines and extra features of the "Elite" line. Thanks to continuous improvements in manufacturing and painting practices, though, today's mid-level car outshines top-level cars from years ago. The casting is smooth and clean, with no noticeable flaws and tight, even gaps between all the panels. These all open easily and close flush to the surrounding panels. Only a minuscule divot near the top corner of each quarter window and some small but ugly mount pins on the rear deck hold this back from a perfect score.

The body and chassis are diecast metal. The hood/trunk pins and roof camera are separate plastic pieces, the windshield, side windows, rear window, and trunk rail are all clear plastic, and the hood and trunk hinges are separate unpainted metal pieces. Wheels are plastic with vinyl tires. All engine, chassis, and interior detailing is plastic. The engine is made from an upper and lower pan, simplifying or omitting the details that may be found on the Elite-level car. It's passable if you don't look too closely, thanks to some decent paint work bringing out details like the hoses, alternator, and plug wires. The air cleaner and surrounding cage bars are separate pieces, which helps. The underside doesn't fare as well, and is clearly a flat piece with a relatively shallow relief indicating the oil pan, starter, and steering/suspension. The rear suspension, by contrast, is actually quite nice, with a separate oil pump and working shocks. The exhaust pipes are also separate. Paint is generally very good, with the appropriate details all picked out cleanly and exhibiting good coverage. The interior is nicely detailed with a soft window net, separate shifter, seat, and fire suppression system, and a well-detailed dashboard. painting is minimal but good: the gauge bezels are sharply done, and enough details painted to make things interesting (including the fire suppression tanks, oil line fittings, and mirror inserts). The three adjustment points are correctly located under the rear window holes, and the cold air hoses generally line up to the windows correctly. The trunk has the correct fuel lines and separate tank, all easily visible despite the relatively small trunk opening.

The paint is almost perfect, with only a very faint thin spot where the C pillars meet the rear deck. There is no "almost" with the graphics, though. Everything from the tiny "Stewart-Haas Racing" under the left headlight to the "street" exhaust tips on the back bumper is sharp and clean with no registration problems, color shifts, or other issues. Some of the highlights include the clean gradients on the lights and flags, the nicely spaced rivets along the edges of the windows, and the "American Ethanol" surrounding the fuel fill.

The hood, trunk, and roof flaps all open. The hood and trunk hinges are stiff enough to hold any angle. The roof flaps are on loose hinges, but open far enough that they will stay open. All four corners have working coil springs. Finally, the front wheels are posable and tied to the steering wheel.

All the details appear to be correct, including some of the SS's more subtle character lines like the heat extractors on the front fenders and the bulges around the rear wheel openings. Scaling is a good 1/24.

It's interesting to watch the parallel developments of NASCAR and NASCAR collectibles. While a modern racer is very different from the cars of yesteryear, so too have the diecasts made terrific leaps from what was acceptable just a couple decades ago. Even though this is not a "top tier" diecast, Lionel has done a very good job with it and it is a worthy addition to any racing collection. Recommended.