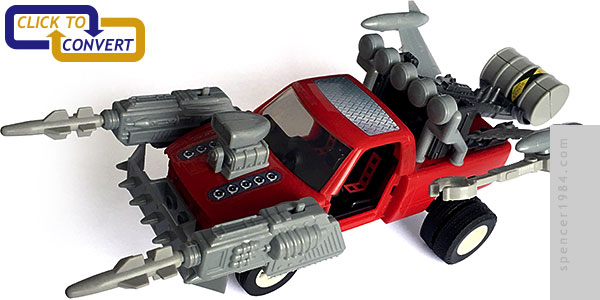 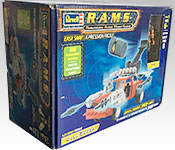 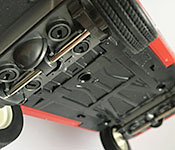 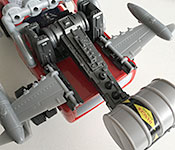 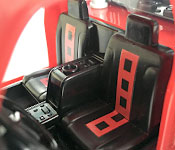 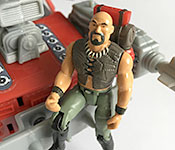 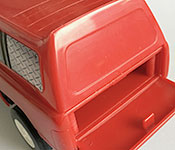 In late 2000, Revell launched an experimental series of toys in an attempt to attract new builders. The series was dubbed RAMS: Rebuildable Action Model System. A mini universe was created that pitted the RAMS Squad against the Techno-Raiders, with each side having vehicles that could be reconfigured using a modular building system. Six vehicles were launched in that first wave, with Dingo in the 4 x Force acting as the RAMS Squad's bruiser (while using a questionable definition of the word "defense"): "Built for Heavy Defense, the 4xForce, like its super-strong driver Dingo, never avoids trouble - it bursts right through it!"

The RAMS cars are packed in cardboard "lunch box" style packages, with a hinged lid and a plastic handle sticking out the top. The front panel has a large picture of the 4 x Force in Eco Defense mode just left of center, with a cutout in the top right corner revealing the included Dingo figure. The Revell and RAMS logos are in the top left corner, just above multilingual callouts for "Easy Snap" and "No Painting/Gluing." The bottom left corner has the vehicle name under a 1/24 Scale callout. Under the figure window is a callout for his name and team affiliation. The bottom right corner claims that the 4 x Force can be rebuilt "30+ ways." Both end flaps are essentially resized versions of the front panel, with the only difference being a cartoon drawing of Dingo instead of the actual figure. The top panel has photos of the 4 x Force in Undercover and Eco Defense modes flanking the handle, along with the series title, team affiliation, vehicle name, and a repeat of the "30+" callout. The bottom has two more photos of 4 x Force in Eco Defense mode, and the back has photos of the 4 x Force's inventory next to co-sells for the other five vehicles in the series. Inside, all the parts are bagged and there is a separate instruction sheet, sticker sheet, and poster.

The instructions start with a spec sheet on the 4 x Force, listing its driver (Dingo), top speed (150mph), top off road speed (80mph), top flight speed (350mph), Armaments (catapult, CX-7 Vindicator Defensive Missile Launcher, and pneumatic claw), and special features (Titanium Ram specially reinforced to crush debris and strong enough to withstand a direct hit from a heavy rocket, and side mount Wing Pods which allow 4xForce to fly and carry the pneumatic claw). Actual instructions start on page 2 with the sticker placement guide, followed by three steps of snapping the basic truck together narrated by Dingo in English and French. The bottom of page 3 and the last page page show three "missions," aka alternate modes for the truck. Mission #1 is "Undercover," and uses the standard bumper, grille, side panels, forced induction scoop, and cap. Mission #2 is "Rescue & Escort," which uses the Titanium Ram in place of the front bumper/grille, 671 Blower in place of the forced induction scoop, swaps the rear axle for the duallie, and uses the roll bar, catapult, and fuel can instead of the cap. Mission #3 is "Eco Defense," which is much like Rescue & Escort but adds the wings and claw, and leaves off the side panels so that the CX-7 Vindicators can be installed.

Much like the Spy Sportster, 4 x Force uses "stock" panels to cover over the mount points scattered across the body. The result is a tidy looking truck with outstanding parts fit and a nice glossy finish. The body is red ABS plastic with molded-in panel breaks, lights, trim, and other details, all sharply cast. The windshield and rear window are clear plastic. The interior is cast in black, with better than average detailing on the dashboard, seats, and center console. The chassis is cast in the same black, with minimal but competent detailing for the suspension bits and frame rails. Tires are soft vinyl over white plastic. As with all the vehicles in the RAMS line, 4 x Force comes with a sticker sheet to decorate the body...unlike the other vehicles, though, the stickers actually detract a bit from the final appearance because of how great it looks in the plain red.

Most of the accessories are cast in light gray, with a darker gray used for the catapult and bases of the wings. Detailing is again quite good, with sharp casting and minimal flash. Two axle spacers are included to give the truck a lift, and while the instructions tell you to use them for all modes the box art and way its constructed indicate that the Undercover mode should use the lower ride height. The duallie axle has a lift built into it, so a spacer isn't needed when using it. 4 x Force also has an undocuumented feature in that the tailgate opens to reveal a complete truck bed. The tonneau cover prevents it from hauling much, but it's still a nice feature. Dingo is, as usual, simple but sufficient, with painted features and joints in his neck, shoulders, hips, and knees. Joints are a bit stiff after 17 years, but I was able to get them moving without much hassle.

Along with looking out of place, the stickers fit worse here than on any other in the RAMS series. Without trimming, the door, side window, and seat stickers had no chance of being placed correctly.

While All-Terrain Pain was only "inspired by" the Hummvee, and Spy Sportster was a passable but still not-quite Diablo, 4 x Force is a nearly spot-on replica of the second-generation Ram pickup. The details most obviously changed, like the headlights and grille, were such popular aftermarket swaps on the 1:1 truck that this still makes a perfectly acceptable Ram. Further driving home the point, the wheels are similar to what was used on the Ram VTS, and anyone who remembers Dodge's advertising campaings from the mid-1990s (just a couple years before the RAMS series was released) knows that solid bright red was basically their official paint scheme. As with the others, scale works out to be a pretty accurate 1/24.

4 x Force is easily the best vehicle in Revell's RAMS series. The undercover vehicle mode is well put together, the accessories work correctly, and the alternate modes work with the vehicle rather than against it. Some paint apps and/or better stickers would have improved things, but that's not really what Revell was going for here. Definitely a winner overall, and if there's one vehicle worth tracking down in the RAMS series, this is it.