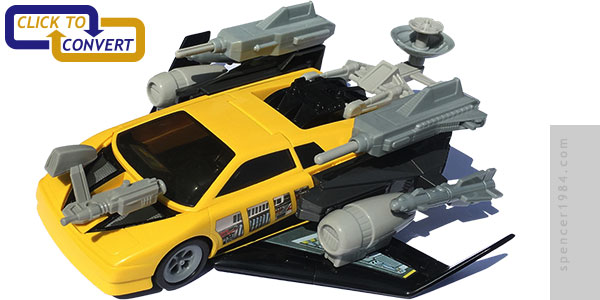 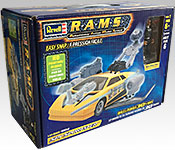 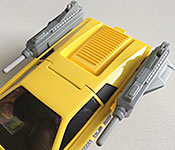 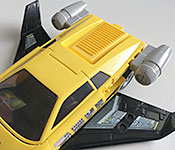 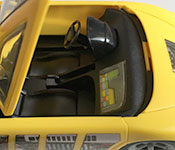 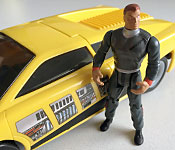 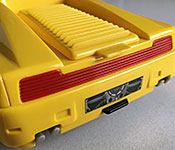 In late 2000, Revell launched an experimental series of toys in an attempt to attract new builders. The series was dubbed RAMS: Rebuildable Action Model System. A mini universe was created that pitted the RAMS Squad against the Techno-Raiders, with each side having vehicles that could be reconfigured using a modular building system. Six vehicles were launched in that first wave, with the heroic leader of the RAMS Squad driving the requisite sports car that converts into a winged conveyance.

The Spy Sportster is driven by Ace Ratchet, former CIA Intelligence Officer and racecar [sic] mechanic extraordinaire. He's a quick thinker with nerves of steel. Ace has loved cars since childhood and his specialty is engines and motors of all kinds. His motto is: "If it's meant to go, I'll make it go better, faster, and stronger!"

The RAMS cars are packed in cardboard "lunch box" style packages, with a hinged lid and a plastic handle sticking out the top. The front panel has a large picture of the Spy Sportster in attack mode just left of center, with a cutout in the top right corner revealing the included Ace Ratchet figure. The Revell and RAMS logos are in the top left corner, just above multilingual callouts for "Easy Snap" and "No Painting/Gluing." The bottom left corner has the vehicle name under a 1/24 Scale callout. Under the figure window is a callout for his name and team affiliation. The bottom right corner claims that the Sportster can be rebuilt "30+ ways." Both end flaps are essentially resized versions of the front panel, with the only difference being a cartoon drawing of Ace instead of the actual figure (and it should be noted that the two look nothing like each other). The top panel has photos of the Sportster in street and attack modes flanking the handle, along with the series title, team affiliation, vehicle name, and a repeat of the "30+" callout. The bottom has photos of two alternate configurations, and the back has photos of the Spy Sportster's inventory next to co-sells for the other five vehicles in the series. Inside, all the parts are bagged and there is a separate instruction sheet, sticker sheet, and poster.

The instructions start with a spec sheet on the Spy Sportster, listing its driver (Ace Ratchet), top speed (250 mph/563.2 km/h), top flight speed (mach 2), Armaments (neutron immobilizer, two rocket launchers with M1 surface-to-air and air-to-air type rockets, and two G-5 ballistic missiles), and special features (carbon fiber aero wing allows travel by air, multi-angled body surfaces with radar absorbing trillium plate coating, and swivel mount radar and communications dish with GPS satellite tracking). Actual instructions start on page 2 with the sticker placement guide, followed by three steps of snapping the basic car together narrated by Ace in English and French. The final page shows three "missions," aka alternate modes for the car. Mission #1 is "Undercover," and has the smooth hood, rear fenders, and louvered engine cover. Mission #2 is "Long Rage Rescue," and has you keeping the hood and engine cover, but adding the wings, missiles, and jet engines. Mission #3 is "Information Gathering," which has all the undercover parts stripped off and replaced with the neutron immobilizer, rocket launchers, radar dish, and surveillance antenna. To their credit, the three modes Revell has displayed here make a bit more sense than the "everything at once" look on the package art (and what I've shown above), with the Long Range Rescue retaining some degree of aerodynamics.

Because this has to work as a toy rather than a typical model kit, is is cast from a thick and tough ABS. That doesn't mean Revell skipped the details, though, drawing on their history as a model maker to ensure that all the proper panel breaks are in place, such as the headlights and doors. All of the body parts are cast in bright yellow, and show surprisingly little light bleed. The windows are smoke tinted clear plastic, the interior and chassis are black plastic, the exhaust pipes/muffler is light gray plastic, and the wheels are medium gray plastic with soft vinyl tires. The lower side coves on the body and rear side windows are painted black, and the taillight panel is painted red.

The accessories are cast in either black (wings, surveillance base), light gray (jet engines, surveillance arm, small dish), medium gray (weapons, large dish), or dark gray (missile mounts). Detail is still good here, with the wings having the proper control surfaces and the rest of the gadgets looking suitably high-tech. They snap on and off easily, though some of the connectors could use an extra millimeter or two to ensure that they lock down properly. As it is they often act as friction joints rather than snaps, and come off a little too easily. The jet engines have some ugly seams, but otherwise the casting on all the add-on parts is as good as the main vehicle. Two of the weapons are functional spring launchers, and fire their missiles about a 12"-18" (30cm-45cm). The Ace Ratchet figure is basic but competent, with painted features and joints in his neck, shoulders, hips, and knees. He can be placed in the Spy Sportster via a hinged roof canopy, and there are two seats inside so he can take a passenger.

Since the stickers are old enough to drive, I wasn't expecting much from them. To my surprise, though, they went on nicely and could be repositioned without tearing. Once on, they're thin enough and cut tight to the printing so they blend in nicely with the car.

Clearly this is meant to be a Lamborghini Diablo, but enough of the details have been changed to keep it legally safe. Just about every panel has been tweaked to some degree, but whoever did the redesign kept it pleasing to look at rather than simply screw up one element until it was no longer recognizable. They kept the sizing correct, too, with this riding on a near perfect 1/24 scale Diablo wheelbase.

It's no secret that I'm a sucker for converting vehicles, regardless of whether they turn into robots or just different vehicles. The RAMS series was a fun idea that never quite caught on, which is too bad because while these weren't flawless there were definitely some good things happening. Most people seem to have completely forgotten about the line, which means you can find some MIB samples for cheap.