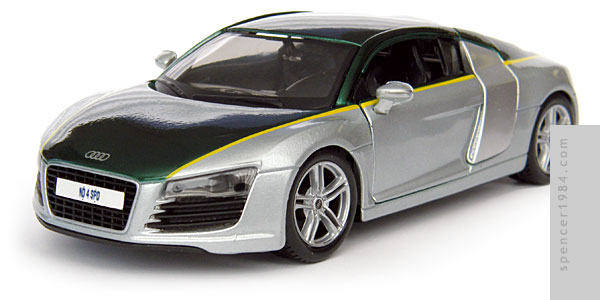 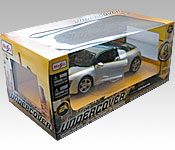 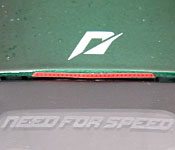 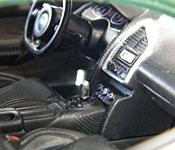 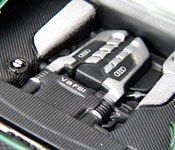 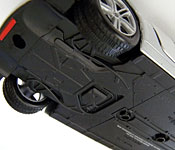 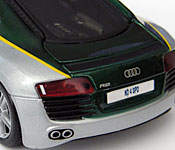 Undercover was the 12th installment in the Need for Speed franchise, and featured the largest open world setting of any NFS game to date. The game sets up the player as a police officer who has gone undercover to infiltrate the criminal underworld of Tri-City, and must complete various vehicle-themed missions to progress. As the player progresses, new cars become available - including the Audi R8, a Tier 1 vehicle that becomes available when the player reaches Wheelman Level 13.5 (out of 18 Levels). By entering "9:G3IF" in the "cheat codes" menu of the PC, PlayStation 3 and Xbox 360 releases, players can also unlock a green & silver version of the R8.

All of Maisto's 1/24 scale Need for Speed: Undercover vehicles are packaged in window boxes featuring gold/bronze artwork to tie them to the game's packaging. The top panel has only the game title, Maisto logo, and age restriction against the gold sky. The front panel repeats all of these, and adds the EA logo, a choking hazard warning, multilingual marketing copy (including a large arrow promoting the secret code inside the package), and a cityscape. The scale, make, and model are printed on a sticker attached near the bottom right corner of the panel. Both end flaps have the title, Maisto logo, and cityscape around smaller windows. The back panel repeats everything found on the font panel, but the individual items have been rearranged to take advantage of the increased real estate. The bottom panel has all of the legal information in white on a plain black background. The insert has a simple yellow/orange fade with Need for Speed: Undercover on the back panel. The car is held in place with two screws that go through a plastic tray that also holds the left door open, and the rear hatch has a plastic band holding it closed. There is a sticker on the underside of the insert with the cheat code.

The overall casting looks decent, though the extreme curves of the R8's body make hiding the parting seams a difficult task. There is also a rough edge along the inside of the right front fender opening, the panels behind the doors have stubs left from where they were attached to the sprue, and there are a few minor panel fit problems around the top of the windshield and bottoms of the doors. The bright silver paint exaggerates these flaws, but the actual application of the paint is pretty good. There is some orange peel visible in the dark green, though it is much more obvious in photos than it is in person. The only place I see a real problem is rear of each window sill, where the green does not go the full length of the door. There is also a bit of overspray inside the rear hatch. The trim is excellent, with silver Audi badges front and rear, a silver R8 badge on the rear, a silver NFS logo at the rear center of the roof, red third brake light, and black splitter, grilles, exhaust ports, and window frames. The windows are smoke tint, and Need for Speed is written in black across the top of the rear window. There seems to be a bit of a fit issue with the windshield on my copy, It has two European-style "ND 4 SPD" license plates. Headlights are clear plastic, taillights are tinted red, and the mirrors have chrome stickers for the glass. The interior is molded in black, with some nice texturing work around the center console to simulate the mixed materials used in the R8's cockpit. Some of the painted details are excellent, like the seat belt buckles, the logo on the horn button, and the radio face. The gauge cluster, however, is a little hokey looking and could have been executed better. Fortunately it's tucked up under the dash cowl so it is not too obvious. The engine is somewhat simplified but looks good under the glass deck. Its surround has been textured to look like carbon fiber, which was a nice touch. The wheels & tires are stock Audi components with printed center caps. Chassis detail is almost nonexistent, which is actually correct for this car.

The rear hatch and both doors open & close, and the front wheels can be posed (but are not attached to the steering wheel and return to center when released).

The front license plate is the only thing that really stands out as incorrect. Otherwise this appears to be a pretty faithful replica of the car that you can unlock with the above code. Scaling is a good 1/24.

For some reason, the Need for Speed series was incredibly difficult to locate, and secondary market prices have risen in response. This is a fair replica—not great, not terrible—and earns a "recommended" if you can find one at or around the original asking price.