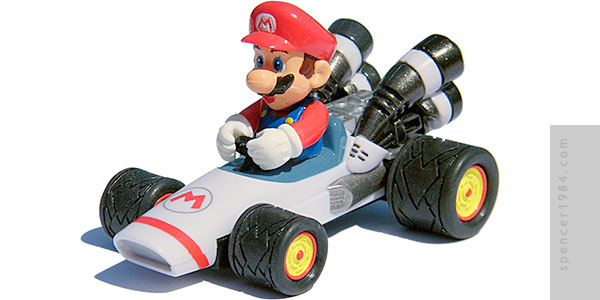 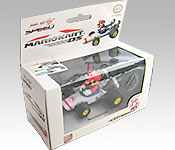 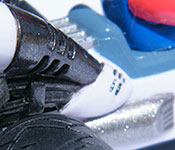 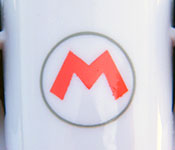 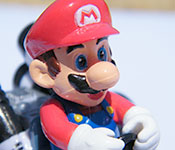 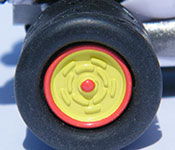 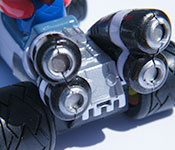 Mario Kart DS was released in 2005, the fifth game in the Mario Kart racing series and the first to feature online multiplayer as a game play option. While the playable roster continued to expand, MKDS retained the core group of Mario, Luigi, Yoshi, and Princess Peach. Mario was, of course, the face of the game, and his B-Dasher was featured on all of the promotional material (including the cover of the game itself). The B-Dasher was a lightweight kart, built like the open wheel "cigar" racer that dominated Formula 1 in the 1950s-60s.

Unlike the Royale, the B-Dasher is packaged in a cardboard box with a raised panel and peg hole. The elements are pretty much all the same, just rearranged: the Pull & Speed logo is in the top left, the MarioKart DS logo is just below it, and the Mario/B-Dasher art is to the right of that. An Official Nintendo Seal has been added to the extreme top right corner. The pull back feature graphics are on the main box, split between the far left corner of the top panel and lower right front panel. Both graphics cut into their respective corners of the main window, which is a pretty thin and easily damaged sheet of clear plastic. "1/43 Scale" is printed in the bottom left of the front panel. The end flaps both have the Pull & Speed logo, MarioKart DS logo, and "Pull Back Action" callout with graphic. The back and bottom panels are dense with multi-language legal info. Inside, a silver cardboard tray has been folded to create walls and an angled plinth for the car. "Mario B-Dasher - 17301" is printed on a sticker near the front edge, and the car is held down with a pair of twist ties. It gains a lot in terms of easy access to the car, stacks better, and takes up much less space, but isn't nearly as durable as the clamshell.

Unfortunately, the B-Dasher isn't nearly as good as the Royale. It's not terrible by any stretch, but there is an obvious joint between the upper and lower halves of the nose and prominent parting seam marks down the sides of the car and seat. There are also obvious joints down the middle of the exhaust pipes, and the tips really need to be cleaned up better. Mario himself suffers from many of the same issues, with parting seams on his nose, cheeks, chin, arms, and hands. The figure wasn't seated properly before being glued into place, leaving a gap between Mario's torso and the top of the racer. The paint is about the same: not terrible, but lots of little flaws like a ghost edge on the nose stripe, rough edges on the side intakes, and specks in the paint. Also, the underside of Mario's hat isn't painted, so there's a white edge between it and his hairline. The paints used are actually quite good, with a bright red for the stripe, silver for the main grille, medium gray-blue for the seat, and some great metallic shades for the engine, they just weren't applied very well. The tires are identical to what we saw on the Royale, but are mounted on completely different wheels. These look great, without the hollow wheel hubs we saw on Peach's ride. Overall, though, that car far exceeded my expectations while this is more like "C+" work.

The big feature here is the pull-back motor. It works well enough, with just a 1" (2.5cm) pull getting more than a foot (30cm) of forward movement.

With the B-Dasher featured so heavily in the marketing for MarioKart DS, it's easy to compare the toy. For the most part it does a great job capturing the racer, right down to some of the more subtle details like the grilles at the bases of the exhaust pipes and the suspension arms above the front wheels. Some concessions were forced by the play feature, such as the black block around the front wheels and the divots in the lower exhaust pipes to clear the rear tires, but overall this is pretty accurate. The only real deviation I see between this and the box art are the wheels, which are depicted as the same 4-lug wheels that were on the Royale, but cast with a 5-bar pattern on the actual toy. The scale is officially listed as 1/43 to indicate which slot car track it belongs to (these bodies were used for multiple products), but the actual scale is closer to 1/24 - 1/32.

This is very much average work for a sub-$10 toy. It's fun and looks good from a distance, but not much in the way of polish. It's worth getting in that range, but I wouldn't recommend paying much more for it.