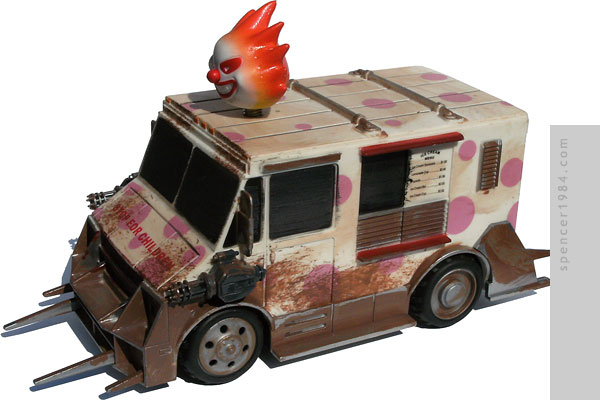 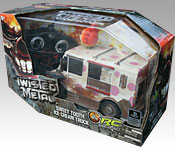 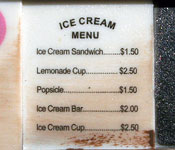 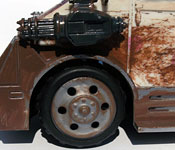 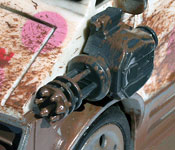 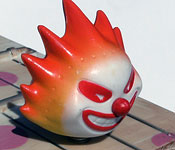 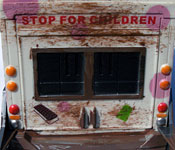 The original Twisted Metal was released in 1995 for the Sony Playstation, and has gone on to become the longest-running franchise for that console. While the graphics have improved and the story has been tweaked over the years, the general concept has remained largely unchanged. The most obvious thread that runs through every game is the series' trademark character of Needles Kane and his heavily armored ice cream truck "Sweet Tooth." The 2012 version of the game used a heavily armored step van for Sweet Tooth, including front and rear blades, forward-facing miniguns, and special weapons "Laughing Ghost" and "Sweet Bot" (a Transformers-esque alternate mode).

Sweet Tooth is packaged in an irregular hexagonal box, with a clear plastic window making up much of the front, top, and right side. A portrait of Needles and the Twisted Metal title make a jagged edge on the left side of the window, and the vehicle name, "RC," and warning information is written across the bottom of the front. The right end flap has a slightly larger portrait of Needles, while the left end flap has a CGI image of Sweet Tooth. This image is repeated on the back, which also includes the game title, PS logo, technical callouts, and NKOK contact information. The inner tray has an explosion design, with Sweet Tooth held in place by two screws and the R/C until held in place by a single twist tie.

The body is a one-piece casting (likely to save weight as well as money), but it does not hurt the overall look. The guns and clown head are separate pieces, and the wheels are plastic with rubber tires. There is no chassis detailing save for a pair of exhaust tips that poke out from under the rear bumper (the battery box and steering adjustment take up most of the space underneath). Details are done in a combination of printing and paint. The printed elements (such as the polka dots and text) are all outstanding. There are no registration issues, and everything appears to be centered and squared correctly. The painted components (including the windows and splatters) are less impressive. Brush strokes are clearly visible on the "glass" components, and the splatters are very crude. While the effect is decent from a distance, things look really bad in some places once you get close. How much this bothers you will depend somewhat on whether you plan to run this as an R/C or keep it as a display piece.

This is a full-function, ready-to-run R/C vehicle. I did not try it out, as I'd like to keep it in good condition and the front blades seem like they might snap off in the event of a collision.

Overall, the casting is a near-perfect representation of the video game model. All of the details appear to be there, including lights, panel breaks, and the side view mirrors. The printed details look pretty accurate as well, though the painted areas are a little rogher than they appeared on-screen. There's no absolute dimensions available, but it fits in well with other 1/24 scale vehicles.

If not for the crude paint work, this would be an awesome piece. The sculpting is very good, and the printed elements are brilliant. But while it doesn't ruin the vehicle - this is still a fun piece that I'm happy to add to my collection - the paint definitely drags it down.