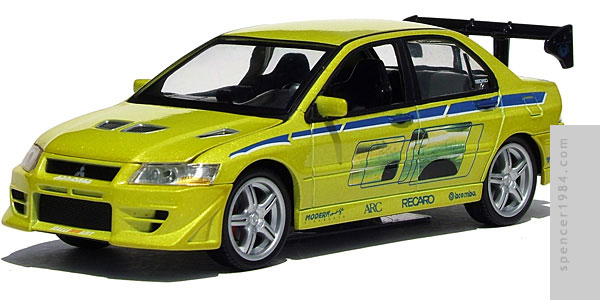 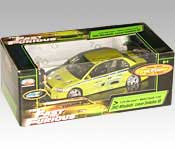 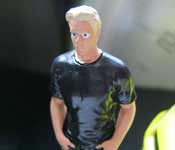 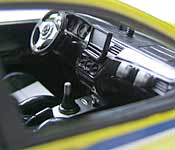 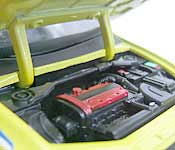 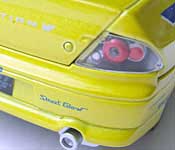 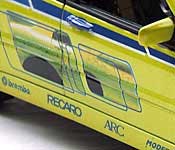 JoyRide's line of The Fast and the Furious vehicles are packaged in a semi-generic box featuring artwork and text predominantly based on the first movie. For example, the original TFaTF title is used on the bottom of the front panel/top of the top panel (including the blurred Toyota Supra used with many of that movie's tie-ins) and the bilingual writeup on the back panel uses the original "quarter mile at a time" promotional text. The rest of the box has a generic black background with green and white white text and green accents. These green accents include the boxes featuring the specific car data on the bottom right of the front panel, top right of the top panel, bottom center of each end flap, and top left of the back panel. The Joy Ride logo is on the left side of the front panel, top center of each end flap, and bottom left of the back panel, and a graphic about the included Brian O'Conner figure is on the right side of the front panel and top center of the back panel. The only mention of the specific movie this car appeared in is a small oval on the left side of the front panel. The car and figure are seated in a black cardboard tray that has been folded and taped onto itself to create additional bulk. The result is a nice, sturdy package that holds up very well and generally looks pretty slick. The car is help to the tray with a pair of twist-ties that have been woven around the axles. Cutters don't save much time here - you will still have to unravel the twist ties from the suspension. A plastic band holds the hood closed. Although those packaging decisions make it difficult to return the car to its original state, there are four rectangular cutouts in the bottom tray that correspond to the four wheels, allowing the car to be re-seated in the package with no effort.

Overall, the casting work here is very good. The only complaint I have is the too-thick wing supports, but to be fair there was really no way to capture these realistically on a mass-produced diecast. A set of plastic supports similar to what Jada does would have been better, but even those are heavier than the supports shown on the 1:1 car. Otherwise, the body is very cleanly cast, with no sink marks, flash, or rough edges. The scoops and vents all look realistically deep, and the panel lines are clean and straight. There is a small step between the corner of the hood and the left front fender; it looks like that fender peak may not be as sharp as the right fender (either a casting error or a flaw with the master is equally possible). The headlights, windows, and taillights are all cast in clear plastic, with painted details as needed. The only flaws I see with these are the rear window post doesn't reach the surrounding trim, and the taillight mount posts break up what should be solid red lenses. The paint is very well done. The base green is applied cleanly, and captures the pearl effect of the 1:1 car very well. The graphics are flawless, as is the window and vent trim.

The interior is also very well cast, with a ton of separate parts like the gauges, monitor, and steering column that create a great overall appearance. The engine and chassis are each single-piece castings, but are deep enough that they don't look overly simplistic. The wheels are cast in such a way as to try to hide the thickness of the spokes (and are partially successful), and are mounted over separate disc brakes. The interior paint is minimal but competent, but the chassis and engine paint was either an afterthought or a rush job. Fortunately, everything that is immediately visible looks great.

The only feature is an opening hood. It opens fine, but flops back closed immediately. The Brian figure bears no resemblance to Paul Walker, and is halfheartedly painted. The sculpting is decent enough that it could be repainted and used, but don't expect much out of the box.

The only real hits against accuracy that I see here are the overweight wing supports and slightly too-thick wheel spokes, and the door handles are blue on the model while they were green on the movie car. Otherwise, this appears to match the 1:1 perfectly, from the body modifications to the graphics. Scaling appears to be an accurately-reported 1/24.

Screen-accurate 1/24 scale 2F2F cars are unfortunately rare, as are 1/24 scale Evos in general. Fortunately, Joy Ride didn't waste the opportunity and instead created a great looking car that does a great job of matching what we saw on the screen. The few nitpicks really don't add up to much, and while the Brian figure is forgettable he doesn't detract from the car or its overall cost. Definitely recommended.