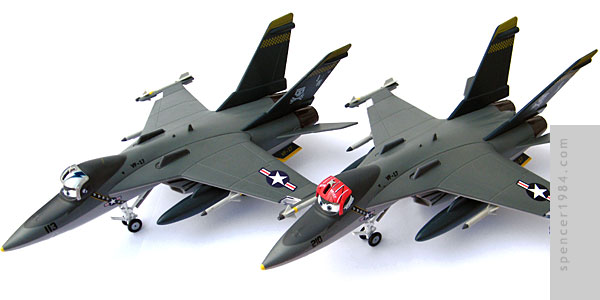 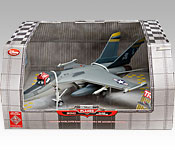 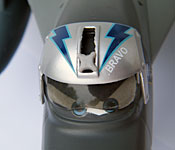 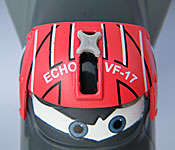 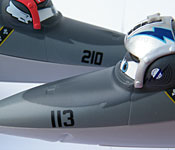 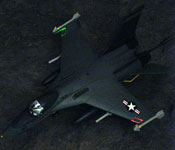 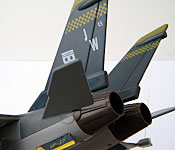 The concept for Planes came from John Lasseter, director of Cars and Cars 2 and chief creative officer of both Pixar and Walt Disney Animation Studios. While Planes was released with only the "Disney" name attached, it is set in the same universe as Cars and uses many of the same concepts. For this film, Dusty Crophopper is a simple crop duster who dreams of becoming something greater. Bravo & Echo are top-ranked flyers stationed aboard Dwight D. Flysenhower who come to Dusty's aid after he is attacked by Ripslinger's henchmen. Later on, they make Dusty an honorary member of their elite squadron, the Jolly Wrenches. Their voices in the movie were performed by Val Kilmer and Anthony Edwards, who played Iceman and Goose in Top Gun.

The Disney Store Exclusive talking Planes series are all packed in a large open-topped box. It measures 15½" (39cm) x 14½" (36.5cm) x 7¼" (18.5cm), with truncated front and back top edges to create the rough appearance of an aircraft hangar. The outside is covered with square riveted plates: gray with dark gray stripes on the front, bottom, and back; yellow on the ends; and gray/dark gray checkered on the top. The front has the Disney Store logo, a matrix barcode to scan for a preview of the movie, the movie logo, character name (on a blue field for Bravo and a red field for Echo), "Action Figure" in multiple languages, and age restriction. The back panel features a large image of Bravo/Echo. Around the image are callouts to several features in multiple languages, including "Speaks 11 Phrases" (Bravo)/"Speaks 12 Phrases" (Echo), "retractable Visor," "LED Lights Activated by Top Button," "Motion Activated Engine Revving Sounds," "3 Free-Spinning Wheels," and "2 Spring Loaded Bombs." The text on Bravo's package is outlined in yellow, and on Echo's package in red, but is otherwise identical. Below this are co-sells for the other three planes in the series: Echo/Bravo, Dusty Crophopper, and El Chupacabra. The legal info, barcode, and official Disney Store graphic are at the very bottom of the back panel. The left end has another large picture of the character, the movie logo, USA call out and flag, and a wireframe profile in either yellow (Bravo) or red (Echo), noting the "Turbine Afterburner" and "Retractable Visor." The right end has yet another character portrait and a Mission Stats Card in blue (Bravo) or red (Echo) with the Jolly Wrenches insignia, "Guardian of the Seas," and "Exceptional Service Record." The bottom of the box has a note about how to change the battery, but is otherwise a continuation of the front/back panel art. The inside of the box is simulated corrugated siding, with an arched window at both ends and a smooth "cement" floor with a worn yellow checkerboard border. A "Try Me" standee is fed through the floor near the front right corner. The figure is held on a clear plastic tray with a pair of plastic bands, and smaller trays held in place with clear rubber bands keep the removable missiles in place.

Bravo & Echo are cast primarily in three shades of cool gray plastic: light for the ventral surfaces and missiles, medium for the dorsal surfaces, and dark for the vertical tails and drop tanks. The exhaust nozzles are cast in a warmer dark gray, the tires and engine intakes are cast in black, and the visors are cast in transparent smoke. Everything fits together very well, probably the best of the talking Planes series. These are also the nicest looking of the series, letting the assemblies' break lines work with the paint schemes instead of against them. Details like the clean panel lines, retracted arresting hook, and relatively complex landing gear further enhance the figures. The only real "miss" as far as casting goes is on the bottom of the fuselage, where the landing gear is mounted to the outside of the clearly defined closed gear doors. There are also some ugly glue spots, such as where the wingtip missles are mounted, but these are generally not too obvious. The battery box, on/off/demo switch, and speaker are all located on the underside of the fuselage.

Both wear "Jolly Wrenches" markings, which includes yellow nose tips, dark gray cockpit/anti-glare area, vagabonds strips (here using miniature "skull & crossbones" in the black bands) with stars & bars forward of each wing mount, an arrow and "VF-17" (a reference to the original Jolly Rogers from the 1940s) printed above each wing mount, dark gray warning markings by the engine intakes, a large stars & bars on the top and bottom of the port wing, "VF-17" in yellow on a dark gray field with yellow trim on the ventral fins, and—of course—the distinctive tail markings: yellow tips & checkerboards above a white "JW" and skull & crossbones (here stylized as a piston head and crossed wrenches). The landing gear is painted white, and the missiles all have yellow bands and dark gray tips. Bravo has "113" printed on each side of his nose (possibly a reference to the long-standing "A113" easter egg in Pixar films), a silver helmet with two-tone blue lightning bolts, his name, and the ringed circle with stars & lightning bolts (a recreation of Val Kilmer's "Ice Man" helmet), and #13 on his tail. Echo has "210" printed on the sides of his nose, a red helmet with black & white stripes, his name/VF-17, and screaming eagles (a recreation of Anthony Edwards' "Goose" helmet), and #10 on his tail. Most of the paint is very good: edges are generally sharp, details are well-defined, and the colors match the cast areas very well. The tips of the vertical tails are not well done, though, and Bravo has a few scuffs in his dark gray paint. Bravo is squinting more than Echo, but it's hard to tell if this was an accident or done intentionally to give them slightly different expressions.

Neither Bravo nor Echo are as talkative as their casemates, but Bravo says 11 things: "All you've got to do is throttle on back and hopefully end up in the spaghetti," "And get ready for the ride of your life," "Bogey has been identified as Crophopper 7," "Identify yourself, over," "Roger that, Crophopper," "Slow down," "Throttle on back," "Unknown rider, unknown rider, you have entered restricted airspace," "We've got us a scudrunner," "We'll do a quick fly-by, then line you up for the barricade," and "Why haven't you responded to radio contact?" and Echo says 12 things: "Booyah," "Check the six and let's get ready to light those burners," "Confirm adequate go juice for the maneuver, over," "Confirmed - you are squared away and ready for nice vapes - roger that, booyah," "Don't get behind the power curve - keep her nice & smooth," "Flying conditions are CAVU," "Good job!," "Look alive - no BOREX maneuvers today, SA is key, so keep it tight," "Oh yeah, bravo zulu," "Our state is 2 plus 4-0 in a splash - plenty of time to have some fun," "Remember, there aren't any bingo fields out here, so keep an eye on those fuel levels," and "This is Echo to wingman, Echo to wingman - do you copy?" These are all activated by pressing the starboard button above the engine intakes. Pressing the port button above the engine intakes will release the inboard missiles. Moving Bravo or Echo will activate their engine sounds; continuous movement will repeat the engine revving sound, while leaving them alone will have the noise switch to an idling engine before turning off completely. The snap-down visors are a cool concept, but the execution is lousy: they stick in the "up" position, are floppy in the "down" position, and come nowhere near covering their eyes. Best just leave the visors "up" and forget about them. Finally, both planes have a working light in each wing: red for port, green for starboard.

Bravo & Echo's casting and colors here look pretty much dead-on when compared to their screen appearances. The detailed helmets are a nice touch, and will be familiar to fans of Top Gun as well as Planes. Like Dusty, they are a combination of aviation features rather than being based on a single plane. The overall shape is the F/A-18 Hornet, but details like the engine intakes, ventral fins, and tail shape are closer to the F-14 Tomcat...basically a generic Naval fighter jet. There are no official numbers for what size they should be, but the F/A-18 has a wingspan of 40'(12.3m). Using that number would put these guys at about 1/43 scale, but it doesn't really match what we saw on the screen. They're a little small compared to the other talking Planes action figures, but not too bad. Really, since Disney ignored true scaling both on the screen and with the toys, I recommend you do the same.

Without question, Bravo & Echo are the best of this series. They look good, they feel more substantial than the prop planes, and they just generally seem to have better engineering behind them. I can not overstate how much better the opaque matte plastic looks, and it's nice to see break lines that work with the sculpt and paint rather than against them. Some of the improvements are inevitable—both Dusty and El Chubacabra had their props backwards, not a problem you can have with a jet—but something like the paint apps should have been up to this level for all four figures. The only downside is that these are not the "main" characters, and so will have a more limited audience. Also, you really can't buy just one of them...so go ahead and pick up the pair. Recommended.