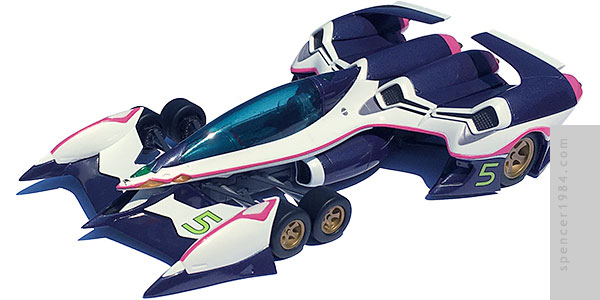 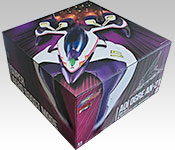 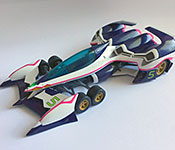 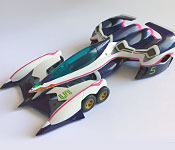 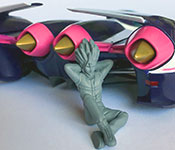 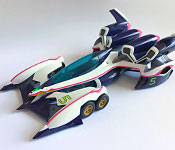 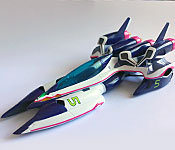 After the events of Future GPX Cyber Formula, Hayato Kazami is the champion and team Aoi has been banned from racing for a year. Risking permanent disqualification due to their aging machine, Kaga is offered the Ogre AN-21: a prototype to the Bio-Computer operated Al-Zard series created by the developers of the ,a href="mega-house-cyber-formula-asurada-gsx.php">Asurada.

This is the "deluxe" release of the AN-21, and while it measures the same 10¾" (27cm) square as the rest of Mega House's Cyber Formula series, it is 6" (15cm) deep to accommodate the extra parts. Rather than the standard window box, this has a hinged panel with magnetic clasps over the window. Three of the six panels combine to form a large picture of the Ogre AN-21, while the other two side panels have a continuous image of the Ogre's rear. It's far more stylized than the typical Cyber Formula box, and looks great. The bottom has multiple photographs of the model along with detailed views and descriptions of its features along with all of the legal and contact info. Opening the panel reveals the car with a large "Circuit Mode" next to the window. The inside of the panel has monochrome drawings of the car in Aero Boost (pink), Circuit (blue), Super Aero Boost (gray), Aero (pink), and Mirage Turn (blue) modes. The inside of he box is made to look like a small warehouse, with a turntable on the floor, garage doors on one wall, and crates stacked along the other three walls. Four plastic trays are nested together to hold all of the parts, the Bleed Kaga figure, and the usual black base. The instructions are printed on the flaps that help hold the end panels closed.

True to form, the Orge AN-21 showcses more outstanding work by Mega House. Sharp, clean casting highlighted by excellent paint work all around. Most of it is cast in ABS , with the rearmost part of the chassis in diecast metal and the canopy and lenses in blue, yellow, and green translucent plastic. The chassis and main engine intakes are dark gray, the tires are black with gold wheels, and the main body is a combination of white and purple. Magenta and lavender accents highlight some of the body contours, and the number "5" is lime green with a black border on the front spoiler and both rear wheel fairings. A tiny green and black Aoi logo is printed on the tip of the nose, measuring less than ⅛" (3mm) across. Coverage is solid and edges are sharp and properly located, with only minor bleed into the cut joints between some colors. Mega House has wisely returned to driverless cockpits, and this one is particularly nice with delicate details like the steering wheel, control lever, and seat belts all made of separate pieces.

The standard release of the AN-21 has a swappable nose, rear wheel covers, and repositioned rear wings to allow you to convert the car from Circuit to Aero and Aero Boost modes. It also includes an unpainted gray figure of Bleed Kaga relaxing and the usual black base. The deluxe release includes a second tray with 15 additional pieces to recreate the Super Aero Boost and Mirage Turn modes: two noses, an extended lower pod section, underbody wings, elongated rear wheel fairings, and larger exhaust ports for the four main thrusters. Converting from one mode to the next is more complicated than usual due to the high parts count and small pieces involved, but everything fits together nicely and looks great once assembled. The only loose-fitting parts I encountered were the outboard winglets in Mirage Turn mode, which fit between the revised lower engines and the standard rear wheel fairings. Once everything is assembled they are locked in place, but getting them there may be difficult thanks to their small size and awkward positioning.

The Ogre looks great in all modes, the spare parts nicely capturing the complex transformations it was capable of on screen. Scaling remains consistent with their other Future GPX Cyber Formula releases.

After a bit of a misstep with their Super Asurada 01, it's nice to see Mega House back on the game. Sculpting and paint are top-notch, there are no weird mannequins in the driver's seat, and the optional parts are easy to use to add a little variety to your collection. The extra ¥4,300 for two more modes is a little steep, but not really outrageous considering the engineering and quality you get. Highly recommended.