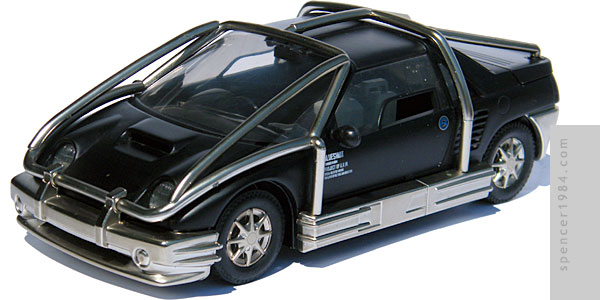 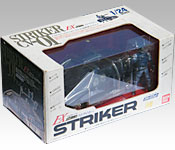 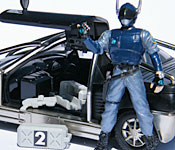 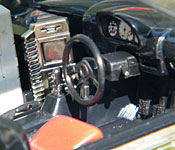 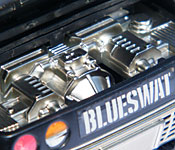 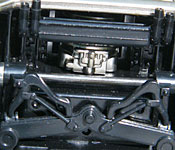 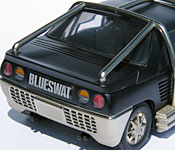 In the early 1980s, a new series along the vein of Kamen Rider and Super Sentai was released. Dubbed the "Metal Heroes Series," it featured mechanical or mechanically-enhanced protagonists that used their technology to fight evil. Blue SWAT was the 13th installment of the series, in which the titular organization was an elite police force created by the Japanese government to repel an alien invasion known as the Space Mafia. When the aliens carry out a successful attack against the Blue SWAT, all but three members of the force are killed: Shou Narumi (team leader), Sara Misugi (former LAPD Officer and second in command), and Sig (alien telepath and former member of the Space SWAT). These three continued the fight against the Space Mafia, using high-tech weaponry that included the CV-01 Striker EX, a heavily armored Autozam AZ-1 with a turbine engine capable of 194 mph (312km/h).

The car is packaged in a simple but sturdy cardboard box with a hole cut in the front/top. "EX Striker" is written in English near the bottom left corner of the front panel, just above "Bandai 1994." The Bandai logo is in the bottom right corner, and the Blue SWAT logo is between it and "Striker." Features of the model are written in Japanese along both sides of the opening. The top has a large "Striker/CV-01" in gold near the top left corner of the top window, and a drawing of the Striker and Shou under "1/24 Scale" in the top right corner. Between them are the scale, vehicle name, and other info written in a combination of English and Japanese. Each end flap has a stylized photo of the model and figure under the car's designation, specs, and show logo.The back of the box has several photos showing the model's features, (along with the usual vehicle name/show title), and the bottom of the box has a breakdown of the box contents and several elevation views of the car. The front and top panels have their print set on a white background, while the other four sides use black backgrounds. Inside the box is a hard plastic display case, with the Striker screwed to the base and Shou Narumi in a specially designed holder near the left rear wheel. A plastic blister helps hold everything in place, and a red cardboard backer is folded around the back and sides of the case to provide the package's only large spot of color. The remaining parts to complete the car are packed separately in the box and instructions for them are included. It's a very sturdy package thanks to the hard plastic case, and the graphics do a nice job of showing what you get.

Although there is some diecast metal in this, it is limited to the chassis pan. The body and all accessories are all plastic, which allows for some very sharp detailing and clean panel lines: the hood scoop, side intakes, and rear bumper vents are all open, something that simply could not be done in metal in 1994. The tires are All of the glass, including the lights, is cast in clear plastic and painted appropriately: red for the outer tail lights, half amber/half clear for the inner tail lights, and clear for everything else. At first it appears that the body is unpainted black plastic, but it has actually all been painted with a clean satin black that shows no errors anywhere. The lower body cladding, wheels, and roll cage are painted a metallic silver/bronze that looks great but is susceptible to wear if you're not careful with it. "BLUESWAT/Founded in 1994/Project of A.R.M./Special Selected Service for Aliens Revoltters and Monsters" is printed under the sideview mirror on each door, and the BlueSWAT logo is printed at the back of the door just below the window. Much of the text is less than 1mm high, but is still legible. "BLUESWAT" is printed in a stencil font on a sticker placed between the two sets of tail lights. The mirror glass is silver foil.

Inside is mostly a continuation of the black and silver color scheme, but also throws in a bright red with the painted seat insert. The gauges are beautifully printed white with black lettering and white needles, and the "high tech" computer console (complete with a floppy disc drive!) is to the left of the center console. There are two pockets in the floor where the passenger's seat used to be, and these hold the two weapons cases. Everything is nicely detailed, from the aforementioned computer console to the door handles and window cranks cast on the insides of the gull wing doors to the separate pedals and levers.

The engine compartment is cramped but still nicely detailed with an appropriately sci-fi-looking turbine and various techno details painted to match the bronze/silver details throughout the rest of the car. The bottom of the turbine is visible above the rear suspension. The chassis pan is diecast metal, but the muffler and both front and rear suspensions are all plastic. The detailing here is excellent as well, featuring drilled control arms and open exhaust tips.

Lots of fun stuff here. First, the doors and engine cover open, but the roll cage gets in the way. You can force the doors past the side bars, but the rear needs to be partially disassembled before you can get the rear deck open. Once clear of the roll cage, everything works great and holds open with no problem. There are also two weapons cases, each of which opens and holds two handguns. These can be very difficult to open, but look good. Finally, there is a static vinyl figure of Shou Narumi in full battle gear, complete with helmet and holstered sidearm. The paint work is very good, and there are some great fine details like the boot laces and adjustment holes in his belt.

Overall, this appears to be a very faithful representation of the car. The roll cage and markings all match the 1:1, and the extra details like the weapons and cases are straight from the series. Stripping away the upgrades, it is a very good replica of the AZ-1 if just a hair bigger than its claimed 1/24—it is closer to 1/23.5.

This is an unusual subject executed brilliantly. That makes locating one for a decent price tricky, because the rarity and quality are offset by its popularity (or lack thereof). So if you're dealing with an importer/collector, you could easily pay over $100 for it...but it's not that hard to find them for less than that with a little diligence. Very highly recommended at the lower prices.