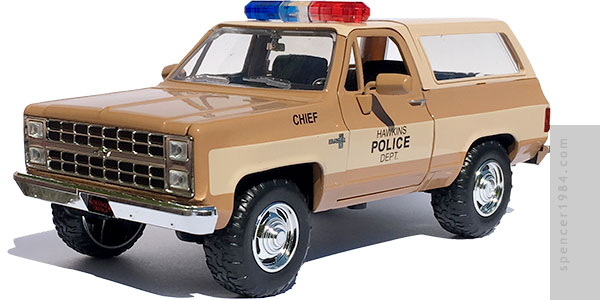 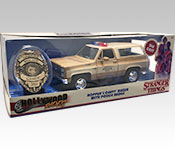 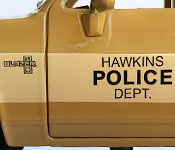 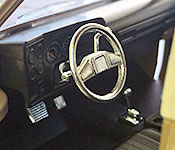 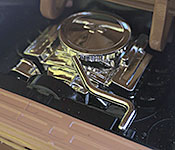 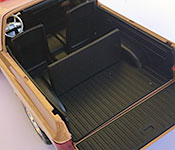 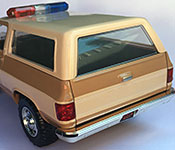 Part of Stranger Things' appeal is how it incorporates nostalgia into its story. Some of that is overt, with callouts to Ghostbusters, Dungeons & Dragons, etc., but some of it is more subtle - like the town's police chief executing his official duties in a two-tone Chevy Blazer.

This is part of Jada's "Hollywood Rides" series, and as such uses their standard long box to provide space for the vehicle and its accessory. The box is primarily light beige with the Hollywood Rides logo, "Hopper's Chevy Blazer with Police Badge," and Stranger Things title logo across the bottom of the front panel. Just right of the window is the season 3 cast art and a "die cast" starburst made to look like a vintage sticker. The "Metals" logo is on the top panel behind the window, and both end flaps have the Netflix and Stranger Things logos. The back of the box has the usual product photos, and inside the Blazer is held in place by two irritatingly deep-set screws with tape holding the rear roof section in place and plastic bands around the hood and doors. The police badge and its display stand are held vertically in a tray near the front of the truck.

The best way I can think to describe this replica is "very OK." The metal parts, including the main body, hood, doors, and tailgate, are nicely done with clean, smooth surfaces. Plastic parts like the chrome bumpers and grille, clear windows, and tinted clear light bar and taillights are also cast well, but there are several minor chips and scuffs in the plating on the grille. The sideview mirrors are the usual softer vinyl with chrome inserts, but the left glass is not seated properly and so it sicks out at an angle. The two-tone paint shows generally clean work and nice sharp printing for the graphics, but there's also a pretty good-sized run in the paint over the left taillight. Similar to the Fast & Furious vehicles, this wears a set of "Stranger Things" stickers for license plates.

The interior is cast in black plastic with chrome parts for the steering wheel/column, 4WD selector, rear-view mirror, and pedals. Most of the casting is very well done, but the hollow seat backs and warped rear side panels are kind of hard to ignore with the top removed. Best to just leave it on. The gauges are done with stickers, and have sharp printing and are placed perfectly.

Under the hood is a chrome V8. It has a separate air cleaner and upper radiator hose, but is flatter and more generic than what we typically see from Jada. The goes for the chassis, which has suggestions of an engine and drivetrain but the details are much smaller and flatter than what we usually see here: the screw mounts holding the body to the chassis have more of an offset than the engine block. Jada continues to use hollow-backed tires on their trucks, which are more obvious here than they were on the Jurassic World Mercedes thanks to the chrome finish on the wheels.

The doors, hood, & tailgate open on nice smooth hinges that hold their positions well and close tightly to the body. The half-cab convertible top is also removable, with an excellent fit that holds tight to the body despite using only friction. Finally, a 1:1 replica of Chief Hopper's badge is included. It's made of metal with a weathered gold finish, and while it lacks any means to wear it, it could be modified for use with a Stranger Things cosplay.

Well, it's a Chevy Blazer that says "Hawkins Police Dept." on the doors. Beyond that, though, there's a lot that could have been made closer. Some of the problems include: the grille is a little too flat, making the front end look almost concave; the headlights are up-trim Silverado rather than the base model used in the show; the lettering on the front fender and door uses the wrong typeface; the wheels aren't even close to the size, shape, or color of the steelies with base caps used in the show; the light bar is painted incorrectly; there are no front corner markers. Scaling is pretty close, coming in around 1/23. It's proportionally a bit wide, but looks good from most angles.

This was so very, very close to being great. Some of the flaws are even easy to write off as necessities of any mass-produced item (unpainted window trim) or Jada's signature look (chrome engine). But then there are a bunch of little details that seem unnecessarily off. Why use the upper trim-level headlights? Why is the light bar painted like that? Why go through the trouble to differentiate between the front and rear hubs to indicate the 4x4 drivetrain, but not bother capturing anything else from the wheels' design? Why not get the markings more accurate? The thing is, this isn't a bad diecast - I actually do like it. But I don't love it. And the problem is that with a little more attention to detail, I would have.