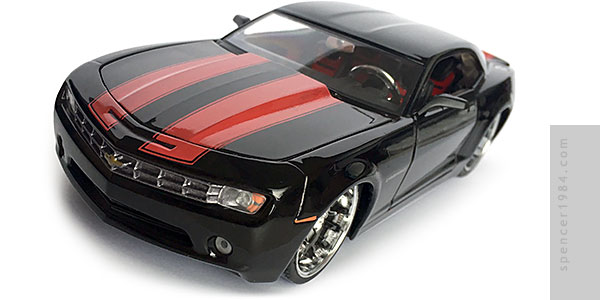 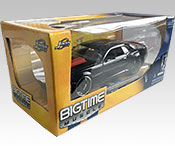 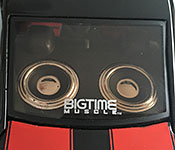 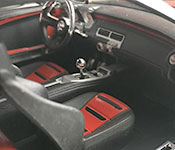 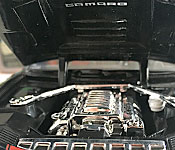 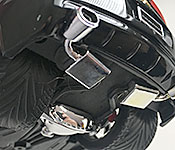 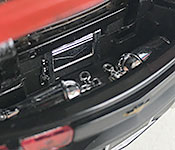 With fourth-gen sales down to a fraction of its previous generation, GM put the Camaro on hiatus after the 2002 model year. Public reaction was swift, and soon enough development started on an all-new fifth generation Camaro based on the Holden Zeta platform. Seven inches (18 cm) shorter but with a 9 inch (23 cm) longer wheelbase than its predecessor, the retro-inspired Camaro concept was unveiled at the 2006 North American International Auto Show to rave reviews. The following year saw the Camaro prominently featured in the live action Transformers movie, cementing its place in the public consciousness. A production version of the design went on sale in the spring of 2009 for the 2010 model year, outselling the Mustang for the first time since 1991.

The Camaro is packaged in Jada's "Big Time Muscle" box. The only difference between this and other releases is the shape of the clear plastic trays holding the car in place, and the name tag on the front of the inner tray that now reads "2006 Chevy Camaro Concept."

Jada went all-out with the Camaro concept, making it available in more color, scale, and wheel options than most of their other models. As is befitting such a strong push, they made sure to get it right: the casting is smooth and clean, with sharp detailing and a flawless fit between panels. The typical metal body has fewer plastic details than usual, limited to the gunmetal gray grille, clear lights, soft vinyl mirrors, and chrome plated fuel cap and license plate bracket. The headlights, driving lamps, and windshield are clear, the quarter and rear windows are smoke tint, and the taillights are transparent red. Most of the paint is very good, held back by a few small errors like spots on the left front fender, A pillar, and right drip rail. The front left stripe also has some problems, with the outer pinstripe wandering off course a bit and a hairline crack where the hood bulge rises from the hood. All of these are extremely small flaws in an overall excellent presentation, though, and so they don't pull down the score as much as they would on another diecast. The bow tie emblems are gold, the corner markers are orange and red, the window surrounds are flat black, and the door handles and Camaro scripts are silver. Stickers are used for the mirror inserts and license plate. Wheels are oversize deep-dish versions of the concept's wheels, chrome with black spokes wrapped in Jada's usual rubber bands. They are mounted over a set of silver brakes with red calipers. As with the other cars in this series, "Bigtime Muscle" is printed at the bottom center of the rear window.

The interior is more elaborate than most of Jada's cars. Most of it is cast in black plastic, with chrome parts for the Chevrolet-stamped door sills, pedals, steering wheel, shift lever, rearview mirror, and rear speakers. Black paint is used for the lower half of the steering wheel rim and speaker cones. Red paint is used for the seat pads, door inserts, and dash trim. Silver is used for the door controls, gauge bezels, vents, and upper and lower center consoles. The two main gauges have printed orange and black faces.

Under the hood is an all-chrome representation of the concept's distinctive 6.0L LS-2. Chrome plastic is also used for the upper radiator baffle and strut tower brace. Detailing is nice and sharp here as well, with most of the hardware, fluid access caps, and mechanical details represented if not fully rendered. Back paint is used for the baffle depressions and Chevrolet scripts on the engine, white is used for the master cylinder, and a silver "Camaro" is printed on the underside of the hood. The minuscule trunk contains an amplifier and a pair of nitrous oxide bottles, all in chrome. The chassis is Jada's usual simplified pan with a chrome differential and mufflers. The flat design suits the Camaro better than most older cars, though.

The hood, doors, and trunk all open on smooth hinges that hold their positions easily.

This is probably the most accurately-shaped of the Jada Bigtime Muscle series, possibly thanks to an edict from General Motors about their (then) all-new showpiece. Jada's designers still managed to sneak in a few of their own design elements, though, most notably the slammed stance and deep wheels (you can see the exact same casting in a more stock configuration here). Scaling is still around 1/22.

With all of the hype surrounding the fifth-generation Camaro, Jada made a smart move cranking out as many options as they did. Even smarter that they made one that was so nicely done and fit perfectly with their earlier ponies. Highly recommended.