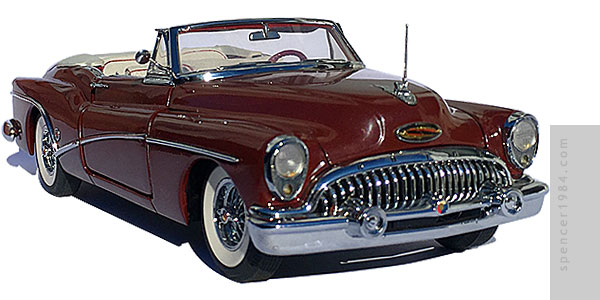 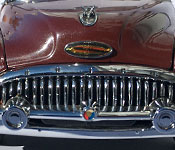 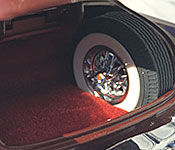 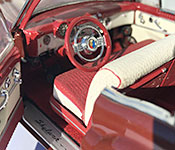 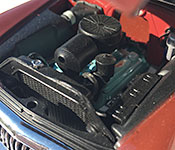 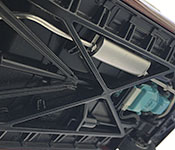 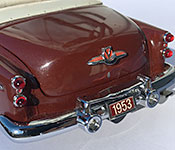 Danbury Mint first issued a 1/24 replica of the 1953 Buick Roadmaster Skylark in 1993, painted Reef Blue. It was a popular seller, and so in 1996 they reissued the car in Mandarin Red. A final "revised and reissued" run of 5,000 was produced in 2003, this time painted Matador Red with an upgraded interior, up-top option, and continental kit. Whether by luck or thanks to someone at Danbury Mint being a fan of cult movies, the Mandarin Red release was a near-perfect match to the Skylark used in the movie Night of the Comet.

Standard DM packaging: safe & strong, but not much to look at. The model comes in a plain white box with "1953 Buick Skylark" written across the top. The model is secured between two styrofoam pieces lined with soft tissue paper to protect he finish. A Title certificate and unpacking/care instructions are folded and placed on the top tray, so they are the first thing you see upon pulling the styrofoam block out of its box.

A solid metal body, with plastic accessories, vinyl tires, and bright chrome trim. Despite its age and my being the second owner, the paint is excellent overall with a realistic and period-correct gloss. There are some scuffs around the passengers' door, which seem to be a factory fault as the door is not aligned properly in the opening. The brightwork is somewhat heavier than newer diecasts, especially on parts like the plastic antenna, but still looks good and has a nice consistent finish. The interior is finished to represent the two-tone leather interior, and while the overall effect is nice the texture is a little oversized and the seam where the front seat splits is so faint as to not be there in some places. The dash face and door panels mix paint and plated plastic to recreate the extensive chrome trim, and there are some excellent details like the legible gauge faces, myriad controls, and open grab pockets on the doors. Buick's Dynoc finish on the lower dash and door panels is represented by a textured white finish, which actually does the job better than expected (the revised version would paint this area silver). The floor is flocked in a matching dark red with a cast-in gas pedal painted black. The brake and parking brake pedals are separate pieces installed in the floor and under the dash, respectively, and the door sills are silver with the correct Skylark scripts. The trunk opens to reveal a removable spare tire and more dark red carpeting. Under the hood is a simplified but still excellent replica of the original Nailhead V8. This was made before Danbury Mint started adding details like ignition wires, so the end result is like a box-stock build of a model kit engine. You can see the beginnings of Danbury's era of extra detailing on the chassis, where they have included transmission lines, the fuel fill tube, and brake linkage. The exhaust pipe is a separate piece, but other details like the Panhard bar and fuel tank are cast as part of the chassis pan.

In addition to the above-mentioned spare tire, the hood, trunk, and doors open, with door hinges that swing into the body just like the full-sized car. As noted above, the right door is misaligned and contacts the front fender and door sill with the rear edge in too far. The other panels all open and close smoothly with no alignment problems. The front wheels ostensibly steer with the steering wheel, but I couldn't get more than a small wiggle out of the system.

For the most part the details here are very good. There are a few nitpicks, like the lack of a split in the front seat, that were addressed by Danbury in their "revised and reissued" edition. Some features, though, like the fine spoked wheels, have aged beautifully and could be compared favorably to a modern diecast. Scale is a perfect 1/24, as expected from Danbury.

Danbury Mint's '53 Buick has aged well; some parts are a little crude by modern standards, but were practically state-of-the-art for a retail item when it was released 25 years ago. They're relatively inexpensive to find on the secondary market (as of Q1 2018), though often have some minor flaws like broken mirrors, damaged paint, or dust, so be careful to check the condition of the car as carefully as possible before you buy. It's an added bonus to '80s movie fans that this replica happens to so perfectly capture the car from Night of the Comet. So whether you want a decent replica of an important Buick or another Hollywood ride to add to your collection, it's well worth checking out this diecast.