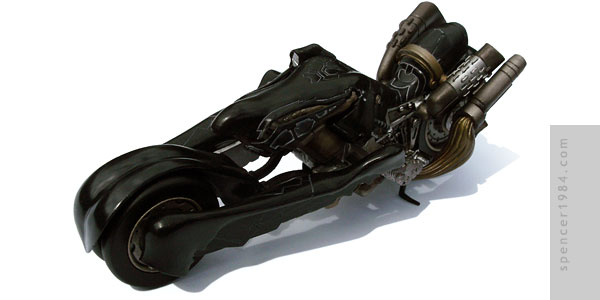 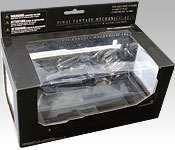 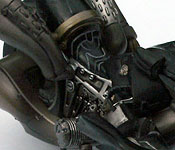 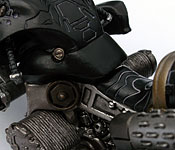 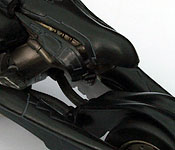 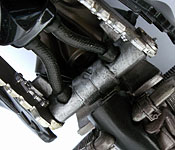 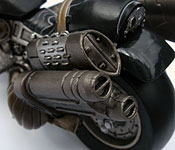 The Compilation of Final Fantasy VII was a multimedia project that included video games, movies, and literature to create a single cohesive story. Advent Children was the first title announced as part of Compilation, an animated movie set two years after the events of the game Final Fantasy VII. In the story, the character Cloud Strife is looking for transportation and makes a deal to acquire the Fenrir from the bike's previous owner. The Fenrir is a high-perfomance machine with a top speed of 250 mph (400 km/h), and has storage compartments along the forward sides for transportation of the Fusion Sword. It survives Compilation relatively unscathed, despite having been in several battles.

The Mechanical Arts series are packaged in "blister boxes": most of the packaging is a standard six-sided window box, but an extra flap stretching up from the back panel has a hole to allow these to be hung from pegs like carded action figures. The box is folded in such a way that every visible panel is matte black. There are four windows: one on the top/front, one in each end flap, and a narrow "mail slot" across the back. None of the windows are rectangular, but instead have unique cutouts to follow the "mechanical arts" theme. The series name and product are printed in chrome on the hang flap and front panel. while all other text is a combination of white and light gray. This includes the warnings on the hang flap, company name on the top and bottom panels, copyright and product info on the front panel, and product info and warnings on each end flap. One end flap also has the warning in a red box for extra attention. The back panel has a moodlit product photo, cross-sells, and all the legal and distribution information. To open the box, two strips of tape have to be cut and the top panel folds forward. The motorcycle and base are held in a set of three plastic trays, built to keep everything separate and making the vehicle appear to be floating in the box. Overall a really stunning piece of design, but unfortunately I have seen multiple boxes that suffered glue failure, allowing the end flaps to break free. These can easily be re-glued, but the loose flaps can easily get damaged or torn on store shelves.

The whole point of the Mechanical Arts series is to create visually stunning replicas, with particular attention to fit and finish. For the most part, they have succeeded admirably. The Fenrir is a more polished design than Kadaj's motorcycle, with sleek body panels and a glossy black paint job with metallic details. These include the engine, chassis, wheels, and trim components. Panel lines and other grooves have been washed with contrasting colors to bring out the details. The tires are made of the same hard plastic as the rest of the bike, but have been painted satin black to give them a realistic rubber look.

The only real accessory here is the base, a generic rectangle shared among all of the Mechanical Arts vehicles. Because this is a ground vehicle, the hole in the center of the base (used as a stand mount for aerial vehicles) has a generic looking plug. The plug is not glued in and fits loosely, so be careful not to flip the base over and lose it. The wheel stand can be moved backward & forward, but cannot fold flat against the chassis.

The only discrepancy I find is the stranded exhaust header, which has more striations on the model than it does in the film. Otherwise, this is a dead-on replica of the Fenrir. As with Kadaj's bike, the size of the seat, handlebars, and foot pegs makes this appear very close to 1/24 scale.

The boxes from Square Enix are really their only weak point: once you free the Fenrir, you are left with a beautiful replica of a very unique machine. Very highly recommended.