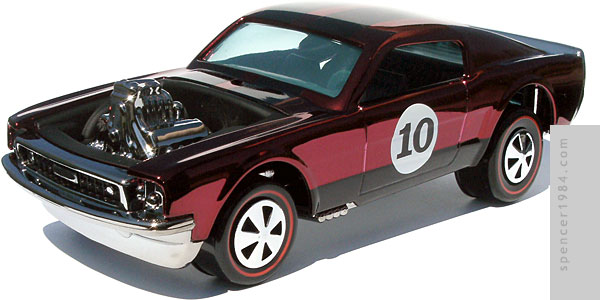 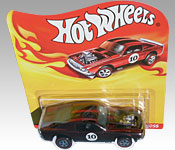 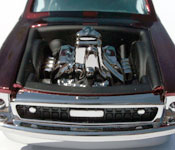 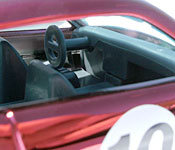 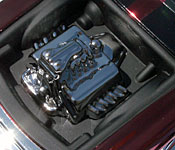 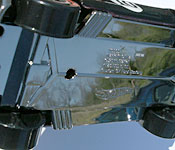 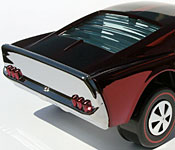 For years, diecast toy cars were simply replicas of existing cars with little consideration given to speed or style. Mattel sought to change that in 1968 with the launch of their Hot Wheels line. Sixteen models were released that first year, all of them either heavily customized versions of street cars or based on show rods and race cars. To further differentiate Hot Wheels from their competitors, the cars were painted with bright "Spectraflame" colors and rode on five-spoke wheels with redline tires. The concept that was created in this first year set the tone for future Hot Wheels cars, and in 1970 they released the "Boss Hoss" Custom Mustang designed by Ira Gilford.

Mattel went full bore with their "vintage" theme, going as far as to make the packaging look like the original blister card. The front of the card has the classic Hot Wheels logo and artistic rendering of the Boss Hoss, with the name across the bottom under the car. The back of the card has all of the current information including a note about the car, the legal and contact information for Mattel, and a sticker noting the number of the car (#136/2000). The cardback and car are captured in a large clamshell that has an embossed Hot Wheels logo on the back and a semicircular "base" under the car so that the packaging sits nearly upright. It snaps open & closed easily, making it very collector-friendly as well as providing nearly bulletproof protection for the car.

Mattel truly made this a 1/24 scale version of the original Boss Hoss. In some ways, this was a missed opportunity: the larger scale offers lots of opportunities to add extra detail, so it would have been cool to see that done here. An accurate Mustang front fascia, detailed engine, or more detailed interior would have made for an interesting update to the classic design. Instead, the details are faithful (if cleaner) reproductions of the 1/64 car. But what it lacks in detail it makes up for in execution. The Spectraflame paint leaves no room for error, since any flaws, scratches, or chips would be magnified by the highly reflective surface. The engine, chassis, and front and rear fascias are bright silver chrome, and likewise would show off any errors. Mattel was up to the challenge, though, and the result is a finish you can just about shave in. The printed graphics include black stripes on the cowl, roof, trunk, and rocker panels, and a black "10" in a white rondel on each door. All of them are printed cleanly, and the only misalignment I see is the numbers being a bit high in the rondels. The interior and wheels are cast in black plastic, and the wheels have perfectly centered redlines and chrome "Neo-Classic" wheels. The glass is cast in a blue-tinted transparent plastic, and like the 1/64 version has the rear window louvers cast into the back glass.

Nothing; what you see is what you get.

There are only a few minor points that differ from the original 1/64 Boss Hoss, and most of them are improvements. The engine bay is matte black on this version, and the taillights have been painted. The chassis is closely modeled on the original, but the bright chrome plating looks nicer than the original raw metal (especially on the rear panel). About the only "misses" are that the rear wheels and rear spoiler should be larger. Normally tire size is a problem that goes the other direction, but here I think a slightly larger tire would have filled the fender opening better and have been a closer match to the original. Likewise, the exaggerated NASCAR-style spoiler was a cool touch on the original, and would have been nice to see here. Comparing it to other mid/late-1960s Mustangs, the scaling looks to be a good 1/24.

When the presales for this first went up, I was hoping that Hot Wheels would do this as a "reimagined" version of the Boss Hoss and take advantage of the larger scale to offer more features and details. It took a while to grow on me, but the more time I've spent with it the more I've come to appreciate it. Now that I know what to expect, I find myself looking forward to seeing the next release in the series and even hoping that Mattel can continue the line for a while. I recommend this to fans of the original Redlines.