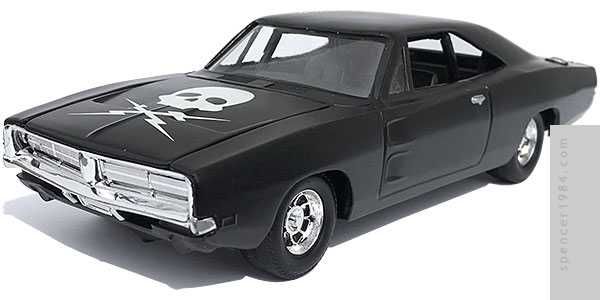 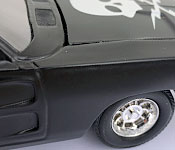 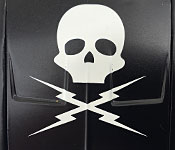 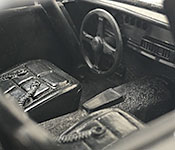 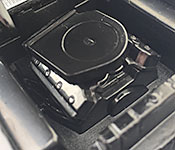 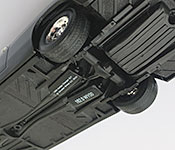 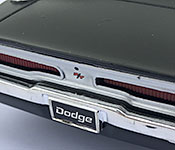 Quentin Tarantino's love of vintage action flicks has been long established, but arguably none of his films exemplified this better than Death Proof. Screened as a double feature with Robert Rodriguez’s Planet Terror, the movie was made to recreate the 1970's grindhouse theater experience as closely as possible: damaged film, bad edits, and trailers for more "bad" movies were all included. The premise of Death Proof was simple: make a slasher film where the killer uses a car instead of a machete, chainsaw, or nail gun. Tarantino says his inspiration came in part from a fascination with the way stunt men built cars to make them essentially "death proof."

Ertl released this to be sold in store displays without retail packaging, having only a bar code sticker on the chassis.

This is a very old tooling by Ertl, first released as the General Lee back in 1980. It's a reasonable starting point for Stuntman Mike's car, since a great deal of its design was inspired by the Dukes' ride, but it is definitely showing its age. Parting seams at the bottoms of the C pillars, shallow panel lines around the doors and trunk, a malformed right rear wheel opening, and a disappearing drip rail along the left side of the roof are all signs that this tool has seen better days. The satin black paint is in similar shape, with dust, bubbles, and cracks that were not helped by its lack of packaging. Strangely enough, though, these faults all feel OK on this car. Part of the reason is that these cars were portrayed as brutal, unsophisticated machines in the movie...so being a little rough around the edges doesn't detract as much as it does from something that was meant to be a show car. But the other thing that helps here is that the bits that are done well look legitimately good. The wheels are simplified, but are still sharply cast with clean chrome and wrapped in nice vinyl tires with decent tread detail. the chrome grille and bumpers are fit into their respective positions with minimal flash and decent plating. The tailights are separate inserts, dark red with silver stripes. Silver paint is also used for the door handles, fuel fill, and tail panel, with good coverage but less than stellar edges. The hood deco, R/T badge on teh tail panel, and Dodge license plate are all printed items, and look much nicer than the painted elements.

Everything else—chassis, interior, engine, etc.—is unpainted black plastic. The roll cage has some ugly parting seams visible through the windows, but otherwise things are pretty clean. The interior is partially stripped, having no back seat, an aftermarket four-spoke steering wheel, and minimal dash details. The gauges are all there, but where the radio should be is just a blank panel. A plate is on the floor between the seats, the remains of what would have been a shift lever.Under the hood is a crude but recognizable 426 Hemi engine with a NASCAR-style cowl induction air cleaner. This isn't mounted correctly, but you get the idea. The radiator and exhaust headers are cast into the bulkhead and floor, respectively. The chassis is a single piece that extends from front bumper to rear splash pan, but contains a surprising amount of detail considering the age of this diecast: the subframe, K member, torsion bars, exhausts, rear axle, springs, driveshaft, and fuel tank are all represented here with some degree of accuracy.

The hood is the only functional panel here, but it works well. Not only can it hold itself open with no problem, it closes better than more recent diecasts.

As a broad stroke meant to evoke Stuntman Mike's car it works fine, but don't expect much more than that. The interior is wrong, the body details are wrong, the engine is unlikely, the grille shows Ertl's stubborn insistence on using the '72-style inserts. Even the iconic skull-and-lightning bolts on the hood wasn't actually on Mike's Charger; only his Nova and the Camaro used on the movie poster. The overall shape is nice, though, with proportions closer to the actual '69 Charger than some others. Scaling is a near-perfect 1:25 (although advertised as 1:24 scale by several sellers, the original release was labeled 1:25).

As I've previously noted, sometimes getting a diecast "close enough" works, sometimes it doesn't. This definitely falls in the latter category. Despite its many shortcomings, I actually really like the attitude it has...and that may be the single most important factor for one of Stuntman Mike's cars. Consider this one of his alternates that never made it out of the garage.