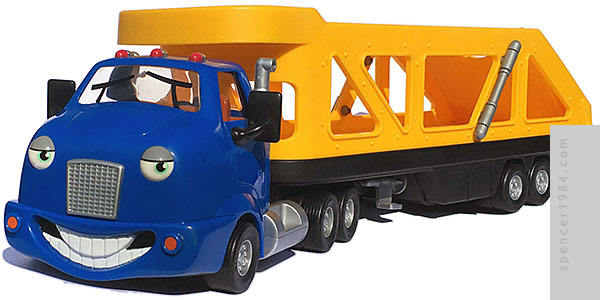 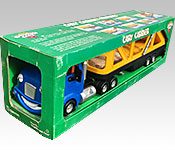 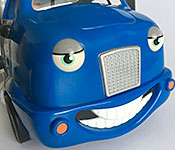 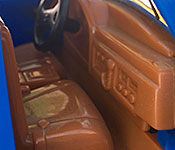 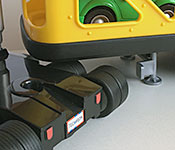 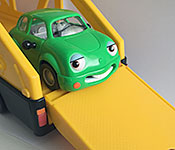 With over a dozen cars in the series, Chevron released their first "large" character/playset in November 1998. Bigger, more detailed, and with more play features than any Car up to that point, Cary Carrier was the first toy in the series to not have a TV commercial personality.

Cary Carrier is packed in a large box, measuring 21½" (550mm) x 5½" (140mm) x 6¼" (160mm). The front panel and one end flap have large windows cut in them so you can see Cary directly, but with no plastic covering the openings this leaves him at risk of dust accumulation and damage. The cardboard itself is sturdy enough, with a folded double wall design that holds up well. Its primarily bright green, with Cary's name and the Chevron Cars logo on the upper front edge. The Chevron logo/name and "Keep your Neighborhood Clean ♻" are printed on both ends near the bottom of each panel. The top of the box has photographic step-by-step instructions on how to hitch up the trailer and use the ramps (reminiscient of the G1 Transformers' "Start-Change-Change-Finish" box tops), along with the usual Chevron marketing blurb: "To Cary Carrier, The Chevron Cars are not just cars, they're...well...family. One big, happy family. So, Cary takes extra special care of The Chevron Car family while guiding them to their destinations...your neighborhood Chevron stations." The back panel has a large illustration of Cary on the street outside a bowling alley, with a Chevron sign and billboard in the background. Wendy, Holly, and Sam are already on the trailer, and Tony driving up the back ramp. The bottom of the package has a photo of Cary with callouts for his moving eyes, opening doors, reflective mirrors, working hitch, trailer support, and double ramp. The customer feedback card and "Owner's Manual" are packed inside the the trailer.

Unlike most of the Chevron Cars that are basically one base color, Cary is a combination of blue and black ABS. His exhaust pipes feel slightly softer than the plastic used elsewhere, and may be thick vinyl to make them a bit safer. The sideview mirrors are the usual black with chrome stickers as "glass," and a Techron sticker is centered on the back of the frame. Tires are vinyl Chevron/Techron branded groove-treaded singles on the front and duallies on the back, mounted on silver 8-lug wheels. His front marker lights are orange, roof and tail lights are red, grille, tanks, pipes, tool box, and roof light housings are silver, and his mouth is black with white teeth. Edges are perhaps a little fuzzier than what we usually see, but considering the more extensive paint applications it still looks pretty good. His eyes are green with gray eyelids. The cab interior is brown with excellent detailing: gauge faces, controls, storage areas, 3-point safety belts with buckles, and a CB radio are all present and sharply defined. The chassis has the usual name and series logo plate, but thanks to the larger canvas we also have detailed springs, engine, transmission, drivetrain, and brake chambers.

Cary's trailer also has a black frame, this time paired with a slightly orange-tinted yellow superstructure. This structure includes both upper and lower decks, which are nicely detailed with tread plate, fastener heads, and control levers. The jacks and side-mounted cylinders are silvery gray plastic, a little darker than the silver paint used elsewhere. The wheels and tires are the same as what was on the rear cab axles, and the license plate is another Techron sticker. Red- and orange-painted taillights are the only paint apps on the trailer, and are solid and correctly placed.

The cab section of Cary has opening doors and moving eyes. The hinges work nicely and the doors snap securely into place. The eyes are activated by pushing down on his front end and rolling him forward, which makes his eyes move left to right. Cary's trailer can be hitched up by simply dropping the tapered pin molded to the bottom of the trailer into the fifth wheel molded between the rear axles on the cab. There's a nice little play feature here, with a groove cut from the fifth wheel to the bak of the frame so you can back the cab up to the trailer and it will locate and seat itself. The jacks under the trailer can be folded up to provide road clearance once it's hooked up. Finally, the rear door of the trailer is a double ramp: fold down just the outside section, and you have a ramp to the top deck; fold down both, and the bottom deck is now open and ready to load. The ramps snap to each other and the trailer sides securely, so there's no danger of them flopping open accidentally. The trailer can hold up to four standard Chevron Cars, with chocks cast into the decks to secure the Cars' wheels.

Cary was a bit of an anomaly, in that he had two different appearances in the commercials. In "Techron is Here" Cary is a simple transporter with no personality or facial features, while in "Guide you Car to True Happiness" he has the standard Aardman eyes and mouth, plus is a taller and skinnier rig with more rounded features and a bit more color. The toy has combined the two, using the broad, square look of the former with the features and more extensive color palette of the latter. His trailer is a bit closer in overall design to the "Techron is here" spot, though it now has a black base, more tapered rear, and lacks the struts around the forward upper deck. The cab section measures approximately 9" (225mm) long, 5" (130mm) wide, and 4½" (115mm) tall; the full rig is approximately 21" (535mm) long, 5" (130mm) wide, and 5½" (140mm) tall.

Cary was a smart addition to the Cars series. He provided a way to play or display previous cars, added even more visual variety to the lineup, and is well designed and constructed. Secondary market values can vary widely, but if you find one for a good price he's a great addition to any Chevron Cars collection.