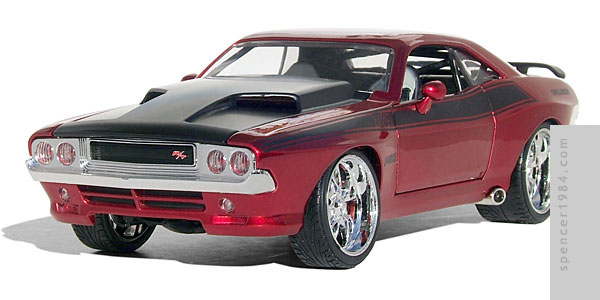 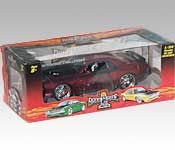 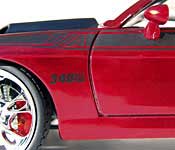 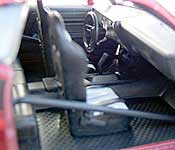 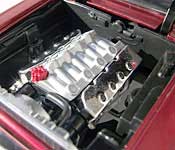 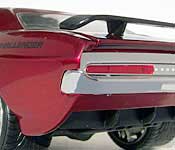 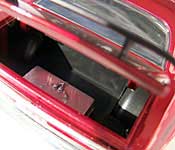 Series 11 continues to use 1BR's "classic" design. Since this series is all-classic Mopar, the cars have been changed to a green '70 Challenger and a Yellow '70 Barracuda on the front of the box. One end flap uses a maroon version of the Challenger graphic, while the other end retains the silver '05 Mustang they've used right along. The maroon Challenger is repeated on the back of the box next to the styling & performance box (the Challenger is rated at 650rwhp and 600lb-ft@~4700rpm). The styling changes listed don't quite match the car (or its drawings), as they mention side vents for brake cooling and an integrated rear spoiler. As with the other recent series, the car is fully closed with plastic bands holding the hood and trunk closed and a plastic tray holding the doors closed.

This is an all-new tooling for 1BR, and looks great. The body is clean & smooth, and the body contours across the separate panels flow together flawlessly. The gaps along leading edges of the doors are a bit wider than usual, but the front fenders do a lot to hide this, to the point where you can't even tell unless you're looking directly at the seams square-on. The hood is an exaggerated version of the original Challenger's twin-scoop R/T hood, with large openings that let you catch glimpses of the engine. The wheels, bumpers, front & rear fascias, and exhasuts are all done in a nice, bright chrome, the headlights, driving lights, and glass are done in clear plastic, and the taillights are cast in transparent red. Everything about the trim looks great with the possible exception of the headlights: they have no backers, so you can see the red bodywork through the clear lenses. On the plus side, the way they are assembled means that ugly center pins (a staple of diecast headlights) are nonexistant. Still, a silver paint application on the bulkhead before the final assembly would've improved the look here. It's not like 1BR skimped on paint applications anywhere else: the grille, scoops, T/A stripes, "Challenger" script, "340 Six Pack" script are done in flat black, the hood and rear spoiler are painted satin black, the mirror inserts are painted silver, the rear fascia "Dodge" script is white, and the R/T badge in the grille is red & white (yes, this Challenger has both R/T and T/A badging). All of the paint applications are executed perfectly—I'm especially impressed by the delicate R/T in the grille—and printed/painted over a beautiful metallic maroon. 1BR has really stepped up their game in the paint department, and the last few releases have really showcased what they're capable of. Inside, the dash, center console, and rear seat appear to be stock Challenger items and are well detailed. The front seats are 1BR's standard racing buckets, and there is a six-point roll cage and revised gauge cluster to finish off the "performance" look. The cage is very well done, with appropriately scaled bars that fit tightly against the outside walls and roof. The engine is very well done as well, but again makes a liar out of the side script: it's not a 340 Six Pack, but a 426 Hemi. The detail work on the engine is simple but good, and flows nicely into a modified version of the Challenger's double-back dual exhausts. A silver fuel cell is the only thing in the trunk.

The doors, hood, and trunk open, the front wheels can be posed, and all four wheels can flex up & down indepedently thanks to a working coil spring suspension. Also, the brake rotors spin with the wheels, but he calipers remain stationary.

Because they generally stick to modified cars, 1BR often gets a bit of a pass in this category. As long as it scales out to a good 1/24 (which this does), the artistic modifications are all fine. Unfortunately, whoever designed the graphics wasn't paying attention and the car ended up contradicting itself. The side stripes claim this is a T/A, but the grille badge and hood style indicate it's an R/T. The fender has "340 Six Pack," despite the presence of a Hemi under the hood and on the box notes. The easiest fix would've been to lose the side graphics altogether, since the only thing they got right was "Challenger" - although this particular script didn't exist on the original car, so it's not quite right either. I will make one other note about the body modifications, though: whoever modified this car really paid attention to the original Challenger. The way the side contour goes straight from the front bumper to the rear fender, then curves up over the rear wheel opening is a perfect homage to the subtle character line on the original.

The Challenger is considered by many to be the ultimate muscle car, and altering such a creation would normally be considered blasphemous. So 1BR took a bit of a gamble playing with the design, but I think it payed off. They kept the basic design intact, but exaggerated some of it's more famous features like the twin-scoop hood and the coke bottle sides. Add in some outstanding paint and detail work, and this replica is a winner. Highly recommended.