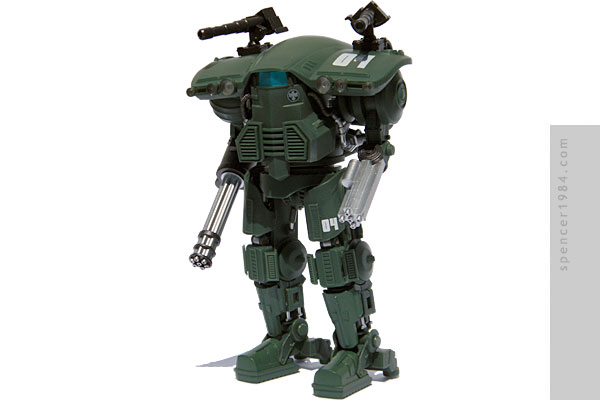 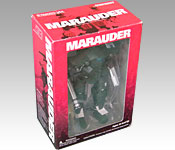 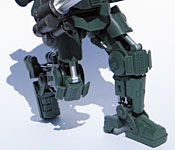 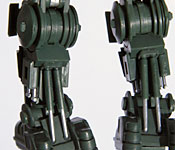 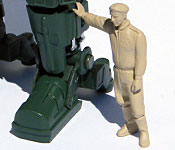 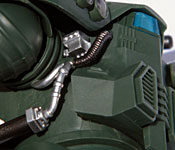 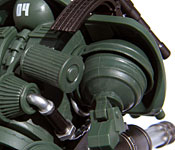 When Starship Troopers was released in 1997, one of the changes noted by fans and detractors alike was the lack of Powered Armor. It wasn't until the third movie in the series, Starship Troopers 3: Marauder, that audiences would finally get to see a live action version of the armor. The movie title (and the equipment it references) comes directly from the original Robert Heinlein novel, where the "Marauders" were the basic suits worn by the mobile infantry. Customized to fit the individual wearer, these were what came to be known simply as "Powered Armor" later on. Starship Troopers 3 kept the concept of customized suits, but made them as larger, more specialized units worn by a select group of soldiers.

The Marauder is in a cardboard box, approximately 5.5" x 3.25" x 8" (14cm x 8cm x 20cm) with a motley fade from dark red at the top to black at the bottom and a simple rectangular window in the front panel. The design is very reminiscent of a vintage toy box, as are the bold colors and text. "Marauder" is in plain bold text across the top of the front panel, with the safety information at the bottom. "Marauder" is written vertically on both side panels, over a drawing of the unit (possibly a heavily-Photoshopped photo of the figure). The Starship Troopers 3 logo is in the top left corner of each panel, and the unit specs are in the bottom left corner. These include the unit type (M11 Marauder/Armored Bipedal Vehicle), unit nickname (Babar), use (Mobile Infantry), weight (10.3 tonnes/11.3 short tons), height (3.65m), width (2.33m across the shoulders), crew (1), armor (fully dense boron carbide plate), primary armament (15.6mm 5-barrel "Morita Cross" heavy machine gun, 15.5mm M64B Vulcan III rotary cannon, 155mm M779 ultralight-weight auto howitzer, 41mm Mk.32 mod.5 grenade machine gun, & M2A5-2 flamethrower), secondary armament (2x 40.4mm "Trip Hammer" smoothbore cannon), power source (RR FX-230 Fission Driver), planetside operational range (1,026.76km/638mi), walking speed (12.87kmh/8mph), and running speed (70.4kmh/43.5mph) The top panel has a different drawing of the unit, the Starship Troopers 3 title logo, and the Yamato logo. The back panel has two photos of the figure, the Starship Troopers 3 title logo, and all of the legal and contact info in multiple languages. Inside, the unit is held between two plastic trays by three twist ties: one around the waist and one around each ankle. The trays are then taped to a cardboard backer that repeats the Starship Troopers 3 title logo, "Marauder," and unit specs in black on a light gray background. A soft plastic sheet protects the Marauder and its pilot, and small pieces of cardboard protect the ankles from the twist ties. The only thing keeping this from a perfect "10" rating is that the cardboard for the outer box is fairly thin, so it is relatively easy to scuff and dent (though the figure has enough layers to keep it safe from all but the most aggressive handling).

While the Powered Armor was essentially a weaponized suit, the Marauder is more akin to a bipedal tank. The area around the cockpit is densely armored, with thick plating across its top and shoulders. This makes the top of the unit look relatively plain, but the design grows more complex as it goes down. Six clear lights are mounted on the leading edges of the shoulder armor, flanking the visor (also cast in clear plastic). The front of the cockpit is peaked like the prow of a ship, with symmetrical details on each side. A set of pentagonal grilles are just above the waist, and a set of hoses and boxes are mounted just below the shoulder armor. These lines wrap all the way around, where they go into an array of what look like air intakes/filters. A detailed spine runs up the center of the back, going from a round mount below the head armor and disappearing behind the intakes. The left shoulder is a simple hinge joint, while the right shoulder has a ribbed ball to suggest a wider range of motion. The waist is a horizontal disk with a short apron on the front to protect the hip joints. These are detailed with ribbing to suggest gears.The legs are complex assemblies of joints, plating, and pistons, with excellent detailing. As expected, the fronts of the legs have armor plating, while the backs have all of the hydraulics. Extra wings are on the sides of the knees to further protect the joints. The feet are detailed with shock absorbing soles, a very nice touch.

Mounted on the very top of the unit are the twin Trip Hammer cannons. Their ammo canisters are draped over the backs of the shoulders, ending just above the intakes. The left arm has the Morita Cross machine gun, which is detailed with a canister inboard of the top barrel and drums both above and below the gun near the elbow. The right arm has the Vulcan rotary cannon, with ammo canisters slung under the rear of the gun body. Most of these look great, though the barrels of the Vulcan are pretty obviously cast as a single piece. None of the gun barrels are very deep, but they are small enough in diameter that they don't look too bad.

The bulk of the M11 is flat green, with silver paint used for the hydraulic pistons, gun barrels, and the lines on either side of the cockpit. The tanks and hoses on either side of the cockpit, Vulcan's body and barrel guides, Morita Cross' drums, and the Trip Hammer cannons and mounts are all painted a dark gunmetal gray. The visor is light blue behind the clear plastic, and is a pretty close match to what we saw on the Revoltech Powered Suit. "04" is printed on white on the left shoulder, left thigh, and top back center. The Federation logo is printed just below the visor on the left side of the cockpit. All of these are printed cleanly with sharp edges and good coverage.

The Marauder has over 15 points of articulation, including ankles, knees, hips, waist, elbows, and shoulders. The ankles are double hinged to have both forward/backwards and side-to-side motion, and the knees have separately articulated armor. Several of the leg joints are connected to hydraulic cylinders, which expand and collapse realistically as the joints are flexed. The Vulcan cannon rotates, and both Trip Hammer cannons are on swivel joints. Other than the right Trip Hammer, all of the joints moved freely and hold their places without a problem. The one Trip Hammer was stuck, and trying to move it felt like the joint partially broke before it was freed. It has no problem standing on its own, and you can even get some pretty extreme poses without having to rely on extra support. It also comes with a human pilot, posed with one arm out to lean on the leg of the M11. The figure is sculpted very well, with a detailed face and nicely textured uniform, but it has no paint detailing and doesn't look anything like Casper Van Dien (Colonel Johnny Rico in ST3).

For the most part, this is a very accurate representation of the M11 Babar. The "04" indicates that this is Col. Rico's unit, though the combination of the Vulcan and Morita Cross as the primary weapons were specific to Sergeant A. Sunday's #03 unit. Also, the Morita Cross should have a green housing rather than silver. Neither of these paint gaffes bothers me, but your mileage may vary. This is most commonly referred to as 1:35 scale, which is reasonable based on the pilot (he would be 5'10"/178cm tall in 1:35). But the specs on the packaging give the Babar's width across the shoulders as 2.33m and height as 3.65m. The figure is 93mm wide and 153mm tall (not including the Trip Hammers), which put it somewhere between 1:23.5 and 1:25.5 scale. Going by this scale, the pilot would be a mere 4'/122cm tall. So it appears that the Marauder and its pilot are out of scale with one another.

Yamato has given us a very cool piece here. The design is interesting, the execution is superb, and it fits perfectly with the Revoltech Powered Suit. I especially like the way the legs are done, with the detailed cylinders and great range of motion. The undersized monochromatic figure is a bit silly, but you can give him some paint and he would look great in a 1:35 military diorama. Recommended for fans or Starship Troopers as well as anyone who collects mechs and power suits.