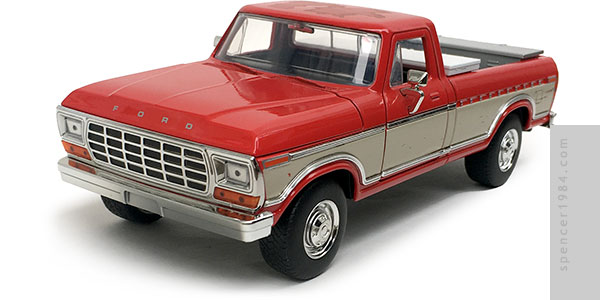 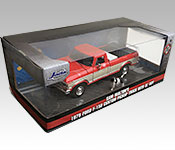 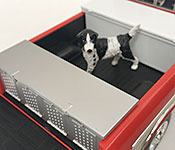 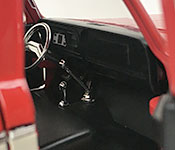 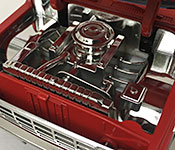 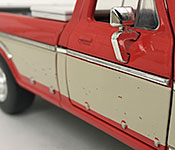 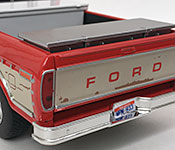 In 1979, Sam purchased a Ford F150 Custom Model with a four-speed manual transmission and four-wheel drive. After more than a few aftermarket dents and scrapes, it came to symbolize Sam’s own humble nature and the humility he expected from his executives and associates.

When he went hunting, he’d stow his dogs in the back. When visiting stores, they rode in the cab with him. Usually Ol’ Roy would go into the store with Sam, but sometimes he stayed behind. When left in the truck, Ol’ Roy passed the time with his favorite chew toy – the steering wheel.

Sam's truck is packaged in Jada's 2020-style box with the revised window frame. Not being part of a movie, TV show, or comic franchise, the outside of the box is relatively plain with no logos or artwork beyong Jada's own. The simpler art allows them to be more verbose with the vehicle description under the main window: "Sam Walton's 1979 Ford F-150 Custom Pickup Truck with Ol' Roy." The back of the box as a photo of the truck and figure, along with a quote from Walton and the above paragraphs, all pulled from the Walmart Museum. The inner tray has the only "branding" of the entire package: a medium blue background with the Walmart "spark" in yellow. A pair of light blue tire tracks rise up the panel, and the base is a printed road surface with Ol' Roy held in a plastic tray next to the driver's door of the pickup. Plastic bands hold the hood and doors closed, while a plastic tray holds the tailgate closed and fixed.

This is a retool of the '79 F150 from Jada's "Just Trucks" series, itself a relatively recent tooling. That means the fit and finish are on par with Jada's current offerings with smooth panels, tight gaps, and clean assembly work. The new parts include the passenger's door and box, both remolded to have missing trim but visible retainers. The remaining side trim is all made from separate chrome pieces, as are the mirrors, bumpers, and grille. The headlights and windows are clear plastic, the front marker lights are translucent orange, and the taillights are translucent red.Paint is used for the side marker lights (both lenses and trim), the retaining clips, and the trim around the tailgate and rear window. Ford logos are printed on the hood and tailgate, applied neatly and with excellent alignment. The side panels have several scratches and rust marks added, and there's a large scuff mark on the roof. While there's an inevitable "produced" look to the damage, it's as good as I've seen on a mass-produced diecast. The bed liner is black plastic, and separate assemblies are used for the forward cargo box and rearward dog carrier.

The interior has a decent amount of detail, with textured door panels, dashboard engraving, and separate chrome parts for the shift lever, 4wd lever, pedals, rear view mirror, and steering wheel. A sticker is used for the instrument cluster. Under the hood is a solid chrome representation of Ford's V8, simplified to the point of caricature but still recognizable. Similarly, the chassis is basic but has some cast-in details like frame rails, exhausts pipes, leaf springs, and a transmission. The tires are vinyl blackwalls mounted on chrome wheels with factory caps over Jada's standard disc brakes.

The doors, hood, and tailgate all open and close on smooth-working hinges. A 1/24 vinyl figure of Ol' Roy is also included, and is nicely detailed right down to his tongue and collar clasp.

It certainly has the overall look of Sam's truck, if a bit neater than the original with fewer dents and glossier paint. While there are a lot of paint apps, there are still some details that were skipped like the door handles and wipers that would have added to the overall look. The interior is solid black, while the prototype had a dark red interior with a black floor only. There's also a curiosity in that the interior has a manual shift lever and clutch pedal, but hte chassis shows an automatic transmission. The chrome steering wheel and engine, along with the performance disc brakes, are Jada trademarks rather than accurate details.

A nice looking truck with a unique place in the pop culture landscape, Sam's truck looks good and could really be a knockout for anyone willing to add a few extra details.