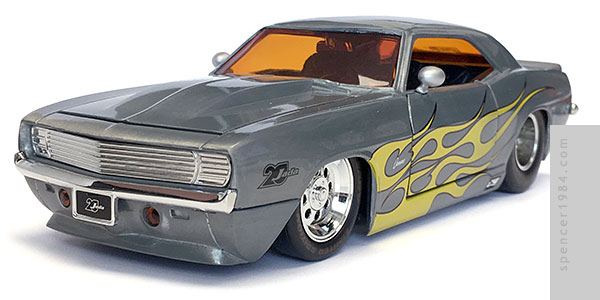 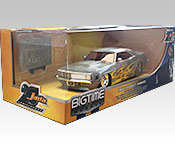 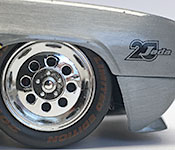 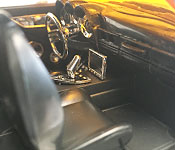 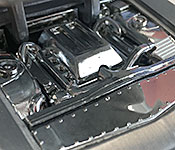 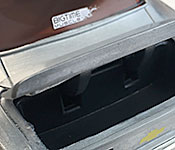 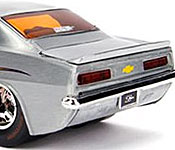 In 2004, Jada took the muscle car genre and injected it with the classic Jada style. With big, deep dish rims, Bigtime Muscle revolutionized a style that was uncommon in its day but continues to thrive in show car circuits around the world.

The Camaro's box is, like the rest of the 20th Anniversary line, nearly identical to the Impala's. The purple fade has been changed to blue, "Bigtime Muscle" replaces "Street Low," and the photo on the front is a what looks like their original release of the '69 Camaro.

Unlike the Volkswagen, the Camaro looks as sharp now as it did 15 years ago. The tooling appears to have gotten a slight refresh, most easily seen at the top rear corners of the door jambs, but parked next to my original release these cars could easily pass for being part of the same production run. The panels are all smooth and tightly fit, hinges work flawlessly, and there is no sign of flash or assembly errors anywhere. The glass panels are transparent orange plastic, and fit flush to the outside of the body. Transparent orange is also used for the fog lights, while the rear lights are transparent red. Chrome plated plastic is used for the grille, bumpers, and exhaust tips. The mirrors are soft vinyl with chrome stickers acting as glass.

As part of the Anniversary line, the base color here is raw metal with a high gloss clearcoat. Yellow tribal flames with black outlines run down the sides of the car, surrounding the small white "Camaro" scripts behind the front wheels. A "20" logo is printed in black on each front corner ahead of the wheels, "20" is repeated in chrome and black as the license plates, a gold Chevrolet bow tie is printed between the taillights, and "Bigtime Muscle" is printed in white on the bottom center of the rear window. For the most part all the paint work is excellent, with a smooth finish and consistent tone. Registration also looks good, though some examples had a step where the door graphics transition to the rear fender so check before you buy. The Bigtime Muscle logo isn't the usual style, this one has the text italicized and a faded tire mark to the right of the logo.

Under the hood is a multi-part turbocharged V8 in solid chrome. The bay itself is also chrome, including the separate radiator support. The interior is a tribute to Jada's golden era, where multiple parts would be used to construct a single door panel. The black plastic used for the bulk of the interior is accented with chrome parts for the speakers, door inserts, gauge cluster, pedals, steering wheel, shift plate & lever, video monitor, ash tray, amp, and fire extinguisher. Another fun period piece is the classic PlayStation controller laying in the console behind the front seats, molded in the same black as the rest of the interior. Stickers are used for the gauge faces. Underneath is a classic Jada chassis pan with a separate silver differential and separate chrome exhaust pipes. The wheels are chrome 8-hole racing style over silver disc brakes with red calipers. The tires are hefty slicks with "Limited Edition/20th Anniversary" printed in orange on the sidewalls.

The doors, hood, and trunk all open and close on smooth-working hinges.

This is another Jada custom that exists solely for the sake of being a custom, but the bare metal look and color tinted windows give it a nice continuity with the other cars in Jada's Anniversary line. One thing to note, though it's not specifically mentioned on the packaging or the car: previous releases of this body were available with either SS or Z/28 trim. This release is the latter.

The '69 Camaro remains one of my favorite "old style" Jada cars. I'm not a huge fan of the yellow flames, but I do enjoy all the other period-correct nonsense like the video game controller/screen and eight massive chrome speakers.