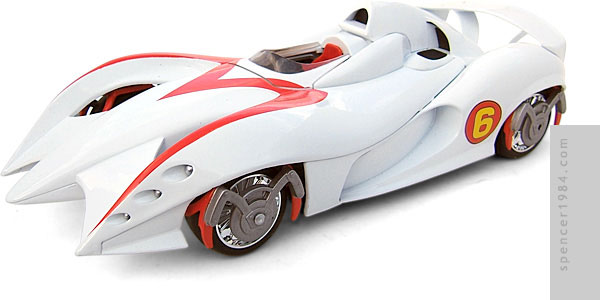 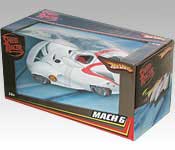 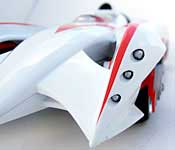 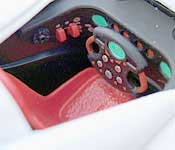 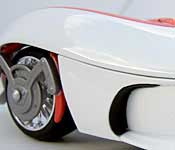 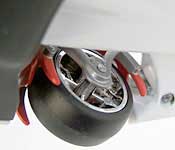 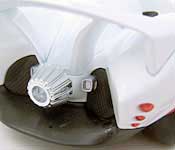 Hot Wheels used the same theme across their entire 2008 Speed Racer line, adjusting it to fit 1/64 cardbacks, various R/C vehicles, and their 1/24 diecast cars. The 1/24 cars come in a standard window box with a dark gray textured background (likely supposed to represent carbon fiber), Speed Racer movie logo in the top left, and Hot Wheels logo in the top right of each panel.The front panel also has the age restriction and car printed across the bottom (the latter above a set of black/yellow/red stripes). The top panel includes the scale and a faint "5/4/3/2/1/Go Speed Go!." Each end flap shows an illustration of the Mach 5 and Racer X racing, sparks flying out from between the cars. The back has a large photo of the 1:1 Mach 6, the slogan "A driver is only as good as the car," and a co-sell for the Mach 5. Hot Wheels tends to release a pair of 1/24 diecsts for any licensed property in the last few years, so these will likely be the only two we'll see. The various legal information is on the bottom and near the bottom of one end flap. The inner tray is printed to look like the track illustrated on the end flaps, and the Mach 6 is held to it with three of the neat no-tools twists that Mattel uses. A plastic band is used to hold the cockpit hatch closed.

The Mach 6 is a ridiculously complex shape, but Hot Wheels managed to pull it off rather well. The only real downside here is the number of parting lines that were required to get an accurate overall shape. The seams are all nice & even, however, including the one around the opening top hatch. The only rough spot I see in the whole casting is a very slight sawtooth along the upper edge of both front wheel openings. There are a number of cool features that Hot Wheels captured correctly, including the complex rear fascia, dual-layer front spoiler, and separate wheel pods. The latter are especially well done: each front wheel is in its own "M" pod, with no solid axle connecting the two and ruining the illusion through the front openings. Bright chrome is used for the wheels and exhaust nozzle, while matte silver is used for the headlights. The cockpit hatch is cast in clear and painted to match the rest of the body. The paint is good overall, though not perfect. There is a slight blemish on the right front fender point, and the flat black scoops have a tiny amount of ghosting along some edges. The "M" on the hood is very good overall, but there is a small spot of red bleed on both sides of the hatch. Other paint applications include the red taillights, silver wheel retainers, and side rondels - all of which look good. The single-seat cockpit looks great, and includes flawlessly painted switches and details. The red seat has a spot of black near the top edge, but I can't tell if it's paint rub or paint tranfer. the chassis is relatively simple, but still follows the contours of the rest of the Mach 6.

The cockpit hatch is the only working feature.

If you don't recognize the Mach 6, it's not Mattel's fault. They really did a great job capturing the design, from the overall shape to the smaller details. there are a couple of minor discrepencies: the rear valence should be gloss white, not black. Also, they skipped a paint application, leaving the rear wheel intakes body color. The only other thing that looks off is the topmost scoop, which has thicker walls than the 1:1 Mach 6. Ordinarily I wouldn't bother to note this, but the secondary scoops right behind it look much better, so thinner walls must be possible. Without having the exact dimensions of the 1:1 car, I can say that the scaling looks accurate.

This was almost another home run. But the issues coming from the complex body - along with a few minor missteps - keep it from being as good as its casemate. It's a solid effort and I would still recommend it, but if you're only going to get one of the Speed Racer movie toys, make it the Mach 5.