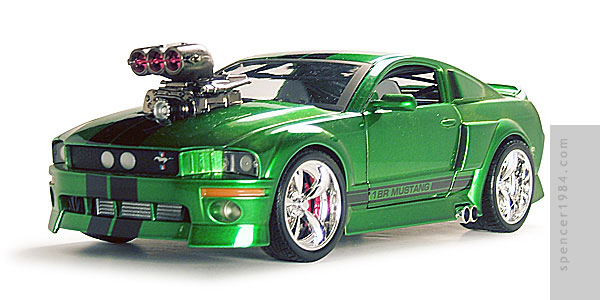 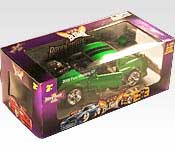 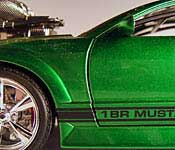 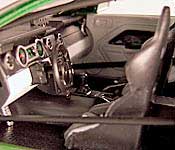 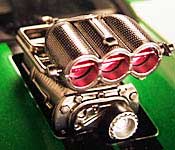 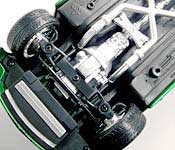 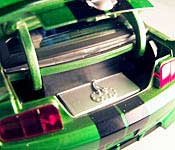 NOTE: The "Blown" series from 1 Badd Ride consists of modified reissues of existing cars. This review will focus on the changes made between the cars, so see my original review for details about the original release.

Cars in the "Blown" series use a similar window box to the regular series, but the decoration has changed. Purple has replaced red, and the 1BR logo in the bottom center has been changed to a Blown logo. The cars on either side of the logo are still a Corvette and a Mustang, but these have been modified to reflect the new engines. the ends of the box have been similarly updated, with another Corvette at one end and a Dodge Magnum panel truck at the other end. The 1BR logo has been moved to the left vertical column on the box front, and is missing entirely from the two ends. The image on the back of the box reflects the new design, but the performance remain unchanged. The bottom of the box has been updated to reflect waves 4-6. The car itself is now posed with only the trunk and driver's door open, though everything about its mounts remains the same.

The casting is nearly identical to the original release, and for the most part has held up well. The primary change is the large supercharger and revised hood, both of which look very good. I can't say "great," thanks to a poorly-planned seam between the upper and lower halves of the scoop, but the detailed texture and well-done work on the fuel injection and supercharger itself make up for this shortcoming. The color of the blower is excellent, making it look like a real metal piece. Unfortunately, the rest of the paint isn't quite as nice. The green isn't as forgiving as the red was, and shows a bit of ghosting at panel edges. Also, the stripes are not as well done as they were before: the hood, roof, and trunk still look great, but the door stripes don't quite line up with the panels at either end, and aren't quite as consistent as they used to be. Also, I'm unhappy to report that the neat see-through grille is not here. In it's place is a solid flat black piece with silver-painted lights and a mustang logo on the left side. It looks good enough, and if I hadn't seen their earlier design I wouldn't have even noticed. But the original design was such a neat touch that it's absence here really stands out.

The doors and trunk still open, and the front wheels can still be posed, but the hood is now permanently closed. The blower is actually larger than the opening in the hood, so it couldn't be made to open without some major work. I had a problem with my passengers' side door not fitting, thanks to a bent hinge. This had to be fixed before the door could be closed properly.

All of my comments from the first release remain unchanged save one. The performance numbers listed on the box now seem a bit more plausable thanks to the engine modification. The supercharger does seem a bit oversized, but it's not so big that it looks cartoonish.

1BR has certainly gotten a lot of use out of this design, and for the most part it's all been good. The "Blown" series is a good idea for extending it a bit further and adding a little more interest, by mixing old-school horsepower with more modern design aesthetics. I wish some things had been done differently on this car, as I'm left with the feeling that it was rushed into production and that with a little more time in development it really could've been a knockout. I wish I could give it a higher rating, as there is definitely a "cool" factor to the design that can't be overlooked. However, between the paint issues, bent door, and fewer widgets than the original release, I can only recommended it to Mustang fans or anyone who missed the non-Blown version.